The international friendly between Germany and the Netherlands in Hanover was canceled by German police over security concerns. No explosives have been found, but there is a 'serious threat to Germany and Europe'. 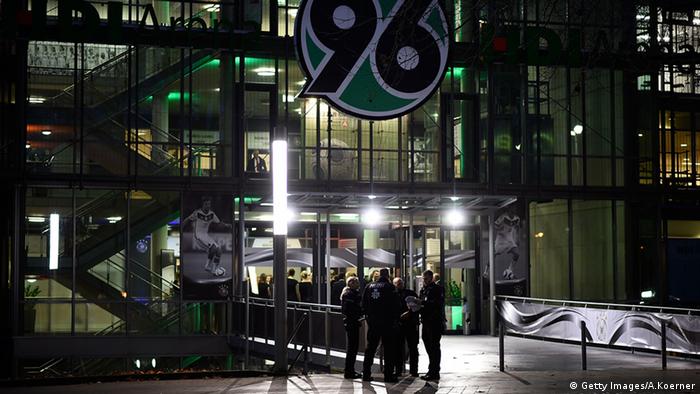 Less than two hours before kick-off in the international match between Germany and the Netherlands in Hanover, the fixture was canceled by German police due to a serious threat of an attack on the stadium.

Volker Kluwe, Hanover's chief of police, stated on German TV that a device "intended to be set off inside the stadium" was found before the evacuation was confirmed.

However, in a press conference Germany's interior minister Thomas de Maiziere confirmed that contrary to earlier reports from a local Bremen publication called 'Kreiszeitung,' no explosives had been found at the stadium.

"The indications of danger at today's game grew over the course of the evening so much so that we urgently recommended the cancellation of the game."

"The game going on would have be irresponsible," said Pistorius.

'A sad day for Germany'

Earlier in the evening a "suspicious object" had been discovered by police forces around the stadium. Road blocks were set up and no fans were allowed to enter the area surrounding the HDI Arena. However, police did eventually open the roads, allowing journalists and fans to enter the stadium, having deemed the area safe.

Shortly after allowing spectators and journalist through, the evacuation was confirmed and all personnel were forced to leave the area.

"We received a tip-off that after the first object was found, another attack had been planned. We had to take this seriously," Klume added.

German Chancellor Angela Merkel was due to attend the fixture, but had not reached the stadium before the evacuation had been announced.

The German national team was en route to the stadium at the time of the evacuation, but Jens Grittner, the German FA press officer, has since confirmed that the team has been taken to a safe "unconfirmed" location.

In Hanover, DW's Sarah Wiertz has confirmed that there was no panic shown by fans who left the stadium. Almost all pedestrians have evacuated the area, but journalists currently remain in a safe area around the stadium.

The 14,000 capacity TUI Arena, which was hosting German pop band Söhne Mannheims, had also been evacuated, according to various reports. However, police have confirmed the concert will go ahead.

Seven people arrested near the German city of Aachen in connection with the Paris attacks have been freed. At least three of those detained were foreign nationals. (17.11.2015)

Belgium calls off soccer friendly against Spain over security concerns

Belgium has called off a friendly soccer match against Spain after the country raised its terror threat level. Germany, meanwhile, has confirmed that six of its players will not face off against Netherlands on Tuesday. (17.11.2015)