The German defense minister says Berlin will weigh up supplying Kurdish soldiers fighting "Islamic State" forces in Iraq with more arms. Germany has already delivered some 1,800 tons of weapons to the peshmerga fighters. 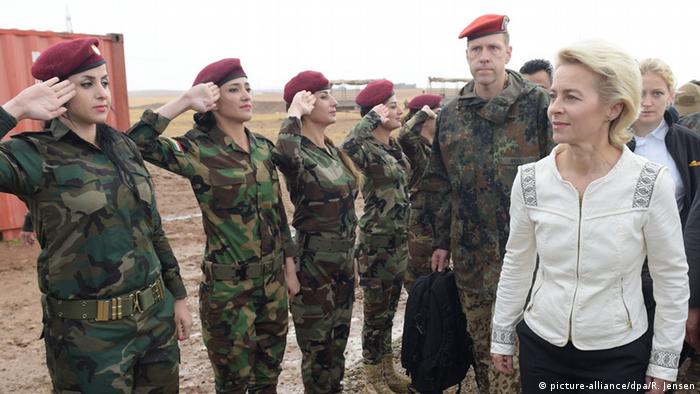 Speaking during a visit to a training camp in the northern Iraqi city of Irbil on Tuesday, Defense Minister Ursula von der Leyen said she would convey requests from the Iraqi Kurdish military for more German weaponry to her Cabinet colleagues for discussion.

"It is clear that there is an ongoing need, as the Kurds are involved in a war against 'IS,'" von der Leyen said.

Among the 1,800 tons of German equipment already delivered to the peshmerga are the Milan anti-tank guided missiles that the Kurds have been using to blow up "IS" trucks containing explosives.

Von der Leyen commended the progress made in training the peshmerga for the fight against Islamic State, saying that the work being carried out by German Bundeswehr soldiers and their Western partners in northern Iraq was falling "on very fertile ground."

Some 100 Bundeswehr personnel are at the camp in Irbil to help train the Kurdish fighters.

She also praised the peshmerga for their success in not just stopping the IS advance, but beating it back.

"We all know that they are fighting this fight for us as well," said the minister, who has been in Iraq since Sunday evening.

Last year, the peshmerga, with support from US airstrikes, stopped IS forces some 20 kilometers (12 miles) from Irbil, which is the capital of Iraqi Kurdistan. The front is now some 60 kilometers from the city.

In summer last year, IS extremists seized large areas of Iraq and neighboring Syria, declaring them as an Islamic "caliphate." The lightning offensive was characterized by extreme atrocities.

Since then, a US-led coalition has been carrying out airstrikes to support attempts by national forces in both countries to drive out the jihadists. Germany is playing no active role in the combat.

German Defense Minisiter Ursula von der Leyen is due to meet with her Iraqi counterpart to discuss ways to remedy the masses of people fleeing the country. Ahead of her visit, she urged unity within the Iraqi government. (26.10.2015)