German authorities are reportedly mulling an appeal to electronics marts to turn off demonstration games consoles during the day because they are often a hangout for school truants. 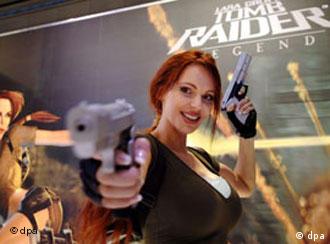 To some kids, playing video games at the mall is more fun than going to school

"Truancy can be the beginning of a criminal career and that's why we have to intervene," said Nagel. "Not every truant becomes criminal, but criminals skipped school at one time or another."

Youths who cannot afford their own games play with consoles set up for demonstration purposes in city department stores and marts when they should be in school or at training courses.

Police suggested the consoles stay switched off every weekday until 3:00 pm, according to the report released Saturday.

The interior ministers of Germany's 16 states will discuss the proposal and other measures to fight youth crime at their spring conference in Brandenburg on April 16-18.

There's no felt table, no free drinks and no poker face, but Internet gambling is booming in Germany. No one, however, talks about the online game's risks and negative side-effects. (08.04.2008)

A government proposal may tighten laws preventing the sale of violent movies and video games to minors. Berlin may also use children as undercover agent to see what retailers are breaking the law. (12.10.2007)

Grandma at the Games Convention

There's competition for hardened players at the Leipzig Games Convention as more senior citizens discover the delights of computer games. (25.08.2007)

Do you think restricting video game demos will get more kids to go to school? Please include your name and country in your reply.