There's no felt table, no free drinks and no poker face, but Internet gambling is booming in Germany. No one, however, talks about the online game's risks and negative side-effects. 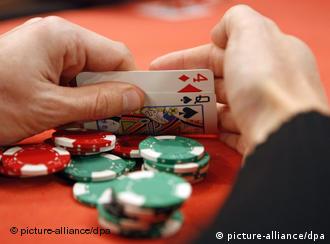 On the Web, you don't have to have a poker face

Nine years after retiring from his professional tennis career, millionaire Boris Becker is cashing in on aces once again. He's become the spokesman in a high-profile ad campaign for a poker Web site.

Becker isn't the only celebrity to lend his face to an industry that's trying to polish up its image and increase its social acceptability. Bayer Leverkusen soccer club has also done ads for an online poker company.

The virtual version of the classic card game first took off in 2003 when American player Chris Moneymaker bet $39 in an Internet tournament and came away with $2.5 million. Since then, the trend has made its way around the world.

According to the 2008 Addiction Yearbook, between 200,000 and 290,000 Germans regularly play poker on the Internet. In 2006, they were estimated to have spent around 1 million euros gambling online.

At the edge of the law 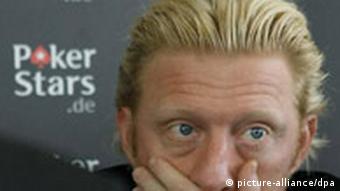 Boris Becker had a poor hand last month in Berlin

In Germany, it's only legal to gamble for money in casinos, leaving the booming Internet market in a grey area. If it involves money, online gambling is against the law, but so far no one has been charged with the crime. Game providers' servers are located far away in Gibraltar, Malta and the Seychelles, making questions of jurisdiction difficult for prosecutors to answer.

Germany's tax authorities have a monopoly on the gambling business and pocket more than half of the industry's earnings as corporate tax. Online gambling, however, remains unregulated and profits circumvent state coffers.

Officially, Boris Becker advertises the non-commercial wing of a particular poker provider, where players deal only in fake money. The aim, though, is to interest more and more people in the provider's "real money" sites, which are reported to draw in huge profits though representatives are unwilling to disclose how much they earn.

But revenues are high enough, in any case, to broadcast elaborate ads on prime-time television featuring former sports stars.

Reigning poker world champion Michael Keiner first caught the bug 15 years ago when the surgeon was at a conference in the US. He was fascinated by the variety of skills needed, the psychological aspects of the game and the mind-boggling sums that changed hands.

After a few years of going back and forth from the poker table to the operation table, he closed down his cosmetic-surgery practice and dedicated himself to the game. Now the 49-year-old participates in international poker tournaments 250 days a year. 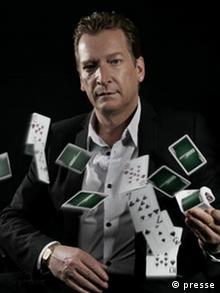 Keiner is sponsored by an online poker provider, but still prefers meeting his opponents face to face.

The poker pro added that the online games lack the psychological component that makes live play so intense and exciting. They're anonymous, engineered and just focus on probability calculations, he said.

While many online gamblers run special computer programs to analyze their chances, Keiner prefers to rely on his own skills and experience.

Beginners, however, can get themselves into serious debt by overestimating their abilities -- and mistaking luck for skill.

Psychologist Tobias Hayer from the University of Bremen, who specializes in gambling addiction, said that online poker has considerably lowered the threshold for compulsion.

And there's no legal monitoring either. Online poker is still immune from criminal prosecution as lawyers continue to debate its legal definition. The game is a mix of calculable and incalculable elements, so is it gambling or a sport?

On the Web, users can play against Boris Becker. But in real life the tennis pro turned spokesman hasn't had much success at the poker table, despite professional coaching. At the "Boris is Back" finale in Berlin in early March, he was eliminated after the first round.

In an age where Europeans are increasingly urged to share and cooperate across borders, it seems only logical that someone would have the idea to spread the possibility of wealth and good fortune between neighbors. (11.02.2008)

Germany Set to Ban Online Gambling as of January

Germany is set to prohibit online gambling starting on Jan. 1. While legislators see the ban as a pillar of consumer protection, critics say the accord only serves to protect the state monopoly on lotteries. (28.12.2007)

The first European Poker Tour event will be staged in Germany in March. Not surprising, as poker is booming here. The game has become hip and popular on TV. But critics warn it could encourage gambling addiction. (25.02.2007)

To what extent should the state get involved in preventing gambling addiction? Please include your name and country in your reply.