Germany Moves to Curb Neo-Nazi Protests | Germany| News and in-depth reporting from Berlin and beyond | DW | 11.03.2005

Germany's lower house of parliament Friday voted by a large majority to tighten the right of assembly, thus making it easier in future to ban neo-Nazi demonstrations at historic landmarks. 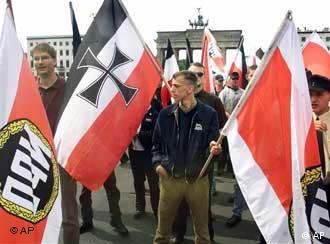 After weeks of heated debate, members of Germany's ruling government coalition of the Social Democrats (SPD) and the Greens as well as the conservative opposition Christian Democrats (CDU) on Friday voted overwhelmingly in favor of tightening the right of assembly and making changes to the existing criminal code.

The clamp-down is designed to curtail far-right demonstrations and rallies by far-right groups at historic landmarks such as the former Nazi concentration camps, Holocaust monuments and other memorials that remember victims of Nazi terror and violence.

The topic had been debated for years in Germany, but took on a new urgency in the past few weeks after Germany came under increased pressure to rein in its emboldened right-wing extremists. 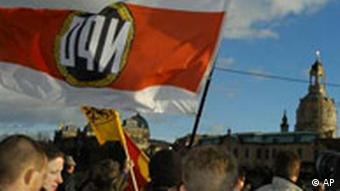 In addition to sharpening the right of assembly, Friday's vote also approved changing the country's criminal code to include a passage calling for up to three years in jail or a fine for glorification of the Nazis, or justifying or downplaying the atrocities of the Third Reich.

"To think of right-wing extremist groups demonstrating in front of memorials for the victims of Nazi crimes, either endorsing, denying, or playing down these crimes against humanity, is unbearable," German Interior Minister Otto Schily said last month.

The Bundesrat or the upper house of parliament is expected to ratify the changes within the next week.

Most parties on Friday hailed the vote as a boost to democracy.

"We'll have a few additional possibilities in the future to prevent Nazi mischief on our streets and squares," said Dieter Wiefelspütz, SPD domestic policy expert. 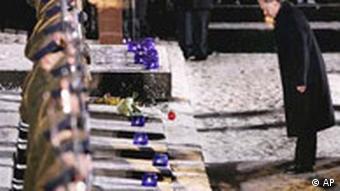 German President Horst Köhler bows in front of a memorial for the victims of the Auschwitz death camp on Jan. 27, 2005.

"A broad majority of the Bundestag has given the victims of the Nazi regime a clear signal: Germany will remain alert even 60 years after Auschwitz," said Silke Stokar von Neuforn of the Green party.

However, Germany's opposition liberal Democrats (FDP) on Friday, voted against the planned beefing up of the right of assembly, saying it had doubts whether the move would work to curb far-right groups.

Max Stadler, domestic policy expert of the FDP, said that freedom of expression and assembly were fundamental to a democracy and that a tightening of the law was the wrong way to deal with far-right extremists. Stadler criticized that the Bundestag was worrying showing itself to be increasingly prepared to violate basic rights. He added it was probably okay in a one-off case, but simply went too far on the whole.

Despite the relief among most mainstream parties at Friday's decision, questions still remain over how effective the proposed sharpening of the law will prove in limiting neo-Nazi groups. Many politicians were annoyed that the changes disregarded a CDU demand to include the Brandenburg Gate in the demonstration-free zone around the German Reichstag. 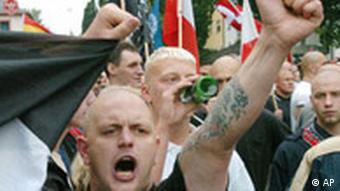 Neonazis march to the grave of Rudolf Hess in Wunsiedel in Aug. 2004.

Bavarian Interior Minister Günther Beckstein criticized that the new law was "rushed and in parts half-hearted," though it did go in the right direction. Both Beckstein and German interior minister Otto Schily said they had doubts whether the spiking of the law could prevent the yearly neo-Nazi march to the grave of Rudolf Hess, Hitler's deputy, in Wunsiedel.

"We can't guarantee what decision the German Constitutional Court could possibly come to one day," Bosbach said. "We're only doing what we can to give the authorities instruments to prevent demonstrations more easily."

Earlier, FDP head Guido Westerwelle called the law "dilettantish" and said that neo-Nazi groups could easily challenge the curbs on their right to demonstrate and had "a very good chance of success" at the Constitutional Court.

Both the government and opposition agree that the right of assembly needs tightening to prevent neo-Nazi marches at historic landmarks such as the Brandenburg Gate in Berlin. But details still need to be ironed out. (Feb. 18, 2005)

Dresdeners on Sunday paid their respects to tens of thousands of people killed in the Allied bombing 60 years ago, as far-right extremists rallied and marred the commemorations. (Feb. 3, 2005)