Dresdeners on Sunday paid their respects to tens of thousands of people killed in the Allied bombing 60 years ago, as far-right extremists rallied and marred the commemorations. 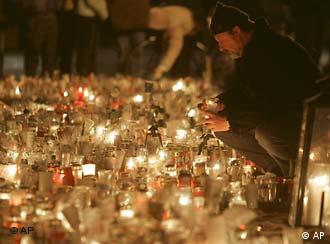 Thousands gathererd in Dresden's center to honor the dead in silence

Church services, wreath-laying ceremonies and a peace run were held, as thousands of neo-Nazis gathered under the watchful gaze of police to draw attention to what they refer to as a "Holocaust of bombs" dropped by the Allies. 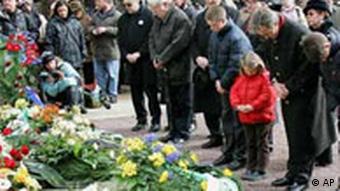 At the Heidefriedhof cemetery, where 20,000 of the estimated 35,000 victims of the napalm-like chemical weapons are buried, ambassadors representing the Allies and political leaders laid wreaths in their memory.

Earlier, 60 athletes, one for each year, held a peace run in memory of the way the virtually defenceless city, which was packed with refugees fleeing the Red Army's advance, was destroyed by as many as 1,200 Allied aircraft.

City authorities expected 10,000 people at the grounds of the Semperoper opera building later holding candles to remember the night when Dresden burned. 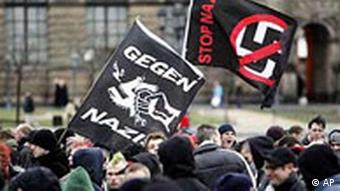 Not far from the building, by the state parliament, around 5,000 neo-Nazis were separated by riot police as counter-demonstrators, many shouting "Nazis out," gathered under the slogan "No Tears for Krauts."

The commemorations this year have taken on particular meaning because a neo-Nazi political party, the National Democratic Party (NPD), recently won seats in the Saxony state parliament, of which Dresden is capital. 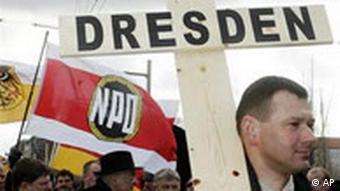 Neo-Nazis demonstrating in Dresden on Sunday

The NPD has been trying to exploit the anniversary, but this year it has been able to do so from the official platform of the regional assembly. Party demonstrators carried banners marked "We won't forget and we won't forgive," another said: "The media and television lie."

One flag showed the face of a soldier with the words "They were the world's best soldiers" written in gothic lettering. Nationalist songs and music by Wagner and Bach trumpeted from loudspeakers.

Many people in Dresden, however, wore white roses as an anti-Nazi symbol. 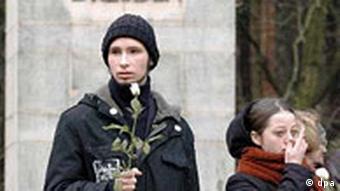 In a statement released in Berlin on Sunday, Schroeder denounced what he said were attempts by the far-right to "hijack and exploit human sufferance."

He pledged to "oppose these attempts to reinterpret history with all possible means. We will not tolerate having cause and effect inverted."

Click here for DW-WORLD's dossier on the resurrection of the "Florence on the Elbe," Dresden.

Dresden has become a synonym for World War II aerial warfare. The destruction of the city on Feb. 13, 1945 signifies both horror and a warning, DW's Ute Thofern writes. (Feb. 11, 2005)