Germany lost at least four billion euros in 2008 on cigarettes that were smoked in the country but not taxed, a study shows. Smokers are opting to buy their tobacco abroad or even on the black market. 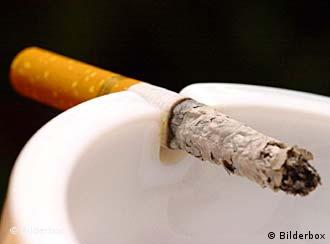 Smokers are changing their buying habits, the survey said

Germany lost out on at least four billion euros ($5.6 billion) worth of cigarette revenue in 2008 as smokers looked for ways to avoid hefty taxes, a study from the Hamburg World Economy Institute (HWWI) has found.

The number of cigarettes smoked in Germany without being taxed in the country has gone up from 16 percent three years ago to 20 percent, it said.

Smokers consumed a total of 23 billion such cigarettes, according to the figures, and the majority were purchased legitimately in other countries. But about seven billion cigarettes were obtained illegally, fueling fears that the trade may be boosting organized crime.

The institute said price differences caused by high taxation allowed organized crime to thrive from trading in contraband. Signs of sophisticated smuggling operations similar to those in the United States, where different states have different tax rates, were now "recognizable" in Europe, according to the institute. 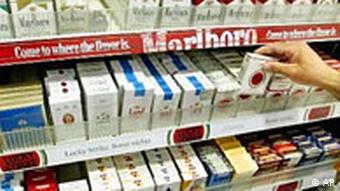 The price of cigarettes has gone up in recent years

The trend comes as smokers try to dodge higher cigarette taxes introduced as a public health measure. Since the latest tax increase in February last year, a packet of cigarettes has cost about 4.50 euros - of which around 3.75 euros is tax.

"The new EU member countries have much lower taxes on cigarettes than we have in Germany and there is always the possibility to smoke smuggled cigarettes. These are, of course, much cheaper," said HWWI Director Michael Braeuninger.

The majority of illegal cigarettes come from Ukraine (3.2 billion) and Russia (2.4 billion), according to the market research organization Ipsos.

The study showed large variations by region of the average proportion of untaxed cigarettes smoked. In some western parts of Germany it was as low as 10 percen,t while in some eastern areas half of the cigarettes bought had no German duty paid on them. Most of those cigarettes originated in Poland.

The study was carried out on behalf of Germany's cigarette industry association, the DZV, which is calling for increased activity against smuggling and counterfeit products.

The change in smoking habits is estimated to have cost the cigarette industry about 1.2 billion euros in 2008.

As the world marks No Tobacco Day on May 31, DW-WORLD.DE takes a look at Germany's cigarette industry, whose new head lobbyist wants to make her work transparent. A major tobacco player and critics aren't convinced. (30.05.2008)

German smokers will be forced to travel emission-free from this weekend as the government anti-smoking law takes effect in all trains, buses and taxis. (01.09.2007)

Cigarettes are expensive in Germany. One pack costs four euros ($5), but more than three euros of that are taxes. Many smokers feel pressed to get their hands on illegal cigarettes. (29.07.2006)