Germany′s Cigarette Clampdown Gets Underway | Germany | News and in-depth reporting from Berlin and beyond | DW | 01.09.2007

German smokers will be forced to travel emission-free from this weekend as the government anti-smoking law takes effect in all trains, buses and taxis. 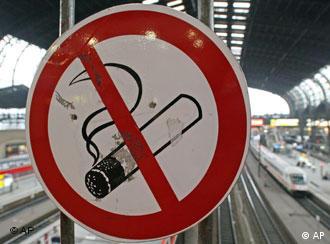 Despite the new law, cigarettes are less vilified in Germany than elsewhere in Europe

The new ban also extends to smoking in public places in railway stations and federal buildings. People here will still be able to light up in designated smoking rooms or designated areas in the larger stations.

Those who ignore the bans could face fines of up to 1,000 euros ($1,360). Germany's rail company said it's planning to remind travelers at regular intervals in the first few days about the new rules.

Anyone ignoring them will first be asked "in a friendly but definite" manner to put out their cigarettes, said a spokesman for Deutsche Bahn. He added that the police would only be called if this request was ignored. 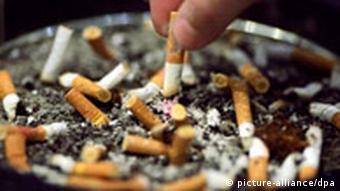 Under the new legislation, it will be illegal for shopowners to sell cigarettes to anyone under 18. Previously, the age limit was 16. The under-18s will also be prohibited from smoking in public.

Health Minister Ulla Schmidt said on Friday that she hoped the law would send a signal to all smokers.

On Thursday, Schmidt and Deutsche Bahn head Hartmut Mehdorn symbolically added a red stripe to a no-smoking banner hanging on the side of a long-distance train at Berlin's new, squeaky clean main station.

But in many other public buildings, such as schools and hospitals, and in restaurants and bars, the situation is more murky. The constitution gives the 16 German states the say here and the approach has been patchy so far.

Other European countries have enforced nationwide bans against smoking. In Germany, the regional states decide where to light up, resulting in patchwork laws. Now three states have taken the no-smoking initiative. (01.08.2007)

Finland To Ban Smoking in Bars and Restaurants on June 1

On Friday, Finland is to become the latest European nation to ban smoking in bars and restaurants, a measure that is expected to be introduced fairly painlessly in the tobacco-critical state. (31.05.2007)

Despite Planned Ban, German MPs Fight For Right to Light Up

The German government last month agreed to ban smoking in public transport and federal buildings. But its own backyard seems to be an exception with some parliamentarians reluctant to stub out. (10.03.2007)