Although the conservative CDU/CSU got the most votes of a single party, most Germans cast their ballots for center-left and left-wing parties. That may be one reason Gerhard Schröder insists he should remain chancellor. 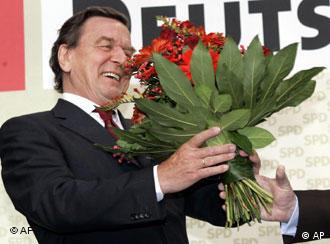 Angela Merkel's Christian Democrats and Gerhard Schröder's Social Democrats both claimed victory for their parties in Sunday's closely fought election, but with 35.2 and 34.3 percent respectively neither party received a clear mandate from the electorate. But a total of 51.1 percent cast ballots for the three parties to the left of the center, the SPD, the Green party and the newly formed Left Party. Only 43.9 percent voted for the conservatives and the free-market liberal Free Democrats (FDP).

But as Germany desperately weighs the different possibilities for a governing coalition, the SPD, Greens and Left Party have all said there's no way the three of them will work together. The Social Democrats and the Greens have stressed they won't work with the Left Party, which, for its part, has said it won't tolerate the other two in a minority government.

Out in the cold

Both the SPD and the Greens galvanized their campaigns by accusing the CDU of a program that would leave people out in the cold, branding the conservatives the "party of social coldness." And their strategy seems to have struck a chord with voters. 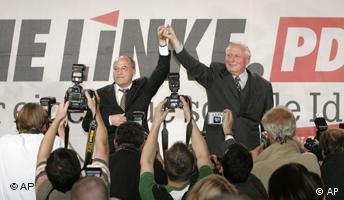 The Left Party, which got 8.7 percent of the vote, has said it looks forward to being in the oppositive

A survey carried out by Infratest dimap for public broadcaster ARD showed that 42 percent of voters believed the Social Democrats would ensure social justice, while only 28 percent had confidence that the CDU/CSU would do the same. And social justice was the decisive issue that caused 60 percent of Left Party voters to cast ballots for the new formation of disgruntled Social Democrats and former communists. At the same time, only 17 percent of CDU voters saw social justice as their party's main strength.

So far, the Greens have used that argument to reject forming a coalition with the CDU and the FDP.

"I can't tell people that I'm fighting to defend our policies, that we don't want policies (that cause) social coldness and ecological regression and later do something entirely different," Green leader and Foreign Minister Joschka Fischer said, as he dismissed the possibility of accepting a cabinet post in cooperation with the CDU and FDP. 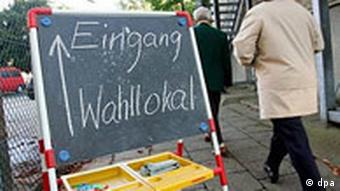 But analysts have been saying the results instead reflect a shift in voting habits on the part of the Germans.

"Voters have proven their independence in this election," pollster Richard Hilmer from Infratest dimap said. Traditional attachments to a particular party have also diminished.

That assessment is supported by a poll that showed that around 70 percent of Germans are unhappy with the result of the election. The telephone survey carried out on Monday by the research group Wahlen revealed that 33 percent of Germans would prefer a grand coalition between the CDU/CSU and the SPD. Twenty-six would like to see the CDU/CSU, FDP and Greens take the reins of government, and less than one-fifth want the SPD, FDP and Greens to rule. Only 9 percent spoke out in favor of an SPD, Green, Left Party coalition.

But Gerhard Schröder does have one thing right: half of those polled want him to remain Germany's chancellor in a grand coalition, and 43 percent are in favor of Angela Merkel in that position.

What Next After German Political Stalemate?

The inconclusive poll has left Schröder and Merkel jockeying for power. By law, either one can become the next chancellor. But, it's the president who can eventually weigh in and name a candidate if talks drag on. (Sept. 20, 2005)

Pollsters Way Off Mark in Forecasts

The fact that opinion polls can't predict an election outcome down to the last percentage point is well known. But why was this election so clearly misread by several different pollsters? (Sept. 19, 2005)