Germany kicks off celebrations to mark 20 years since reunification | Germany | News and in-depth reporting from Berlin and beyond | DW | 02.10.2010

Germany kicks off celebrations to mark 20 years since reunification

Germany has begun a weekend of celebrations to mark the 20th anniversary of reunification. Politicians have been urging Germans to celebrate the accomplishments achieved in the united country over the past two decades. 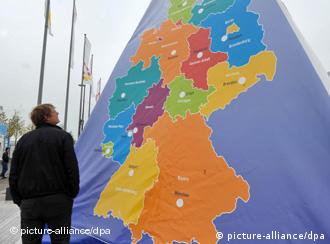 A visitor in Bremen checks out an exhibit on reunified Germany

On October 3, 1990 Germany was officially reunified after four decades of division into the Soviet-controlled communist German Democratic Republic in the east and the Federal Republic of Germany in the west.

The Berlin Wall had fallen just 11 months earlier when Germans celebrated their reunited status in front of the Bundestag, or parliament, in Berlin.

October 3 has been a public holiday since, with the northern port city of Bremen this year taking its turn as the lead city for the celebrations.

The city has been turned into a venue for concerts, street parties, parades and appearances by leading politicians.

"Today, we remember the brave citizens who fought for freedom. That's why we're celebrating today with a citizens' festival," Bremen mayor and the current president of the upper house of the German parliament, Jens Boehrnsen said on Saturday as he kicked off the festivities.

In the market square, a version of the Berlin Wall has been erected to display images and texts showing the story of the country's division and reunification. 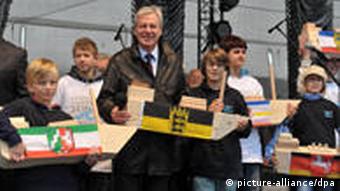 Among the high points of the celebrations set to take place over the weekend are a firework display on Saturday evening along with a performance by 1980s German pop sensation Nena.

Around 1,500 mainly left-wing demonstrators held protests in Bremen on Saturday, coinciding with celebrations for the 20th anniversary of German reunification.

Under the motto "October 3rd is not a day to celebrate" the demonstrators marched through Bremen's city-center. Fireworks and bottles were thrown but a police spokesman said fears of large-scale riots did not materialize.

Ahead of the weekend celebrations leftists groups and anarchists had threatened to launch attacks and civil unrest.

Chancellor Angela Merkel and German President Christian Wulff are due to give speeches on Sunday, with a church service also planned.

All 16 of Germany's states and cities were being represented at the festival venue.

In her weekly video address, Merkel urged Germans to value the freedom and democracy reunification brought to eastern Germany and not just complain about the costs.

"It's thanks to these joint efforts that we've been able to rebuild so quickly," she added.

In an interview with daily Bild am Sonntag, Merkel said she wished people in the West would appreciate more what people in the former East had achieved.

"It's a shame that some people still don't understand that the GDR regime was one thing, but the individual people and their achievements are another."

Speaking ahead of the anniversary, President Wulff said: "20 years of German unity is an occasion to celebrate, but also to pause for thought. The changes that have occurred in our country in this time are immense, particularly in the east."

Famous landmark is a focus 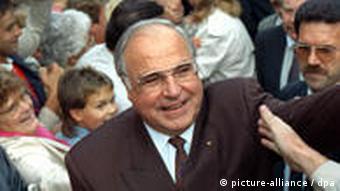 Kohl presided over the process of German reunification

In Berlin, the Brandenburg Gate is the focal point for an entertainment program, with stage shows and attractions lined up along the avenue leading to the landmark.

As the country prepared for the occasion, there was a rare speech on Friday from former Chancellor Helmut Kohl, who is known in Germany as "The Reunification Chancellor."

Kohl, aged 80 and now confined to a wheelchair, spoke of the significance of the occasion to a meeting of Christian Democratic party colleagues.

"These dates are an occasion to take pleasure in what we have achieved, to remember with gratitude and pride where we have come from and also to look forward together," he said.

A grand celebration of unity

On the night of October 3, 1990 thousands of people celebrated German reunification in Berlin. That night was the culmination of months of difficult negotiations, months when it wasn't at all clear how it all would end. (01.10.2010)

In an interview with DW, Philip Zelikow, involved with reunification for the White House, talks about Germany's reduced role since reunification and the peculiar painting he received from an East German diplomat. (30.09.2010)

Chancellor Angela Merkel has said she is satisfied with the results of German reunification. Despite a rocky start, the benefits have outweighed the difficulties along the way, she said in a magazine interview. (26.09.2010)