Germany Hails Bali Outcome as Better Than Expected | Germany | News and in-depth reporting from Berlin and beyond | DW | 15.12.2007

German Environment Minister Sigmar Gabriel welcomed the outcome of the UN Climate Change Conference on Saturday after a grueling all-night finish in which the negotiating countries ironed out a last-minute compromise. 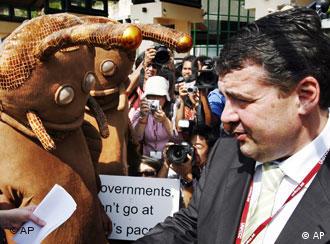 The conference outcome is an important step forward, according to Sigmar Gabriel

"Much more was achieved than expected given the different interests at stake," the minister said in Bali where he represented Germany at the talks.

At the same time, the result that came out of the tough negotiations was less than what Germany and the European Union had hoped for, he said.

Gabriel said the important thing was that there was now a roadmap for a new climate treaty with "considerably stronger" commitments to climate protection from all industrial nations, including the United States.

The UN conference was also a success inasmuch as it included developing nations in climate protection measures for the first time, he said.

The talks ended on Saturday with an agreement on a "roadmap" for a two-year process of negotiations designed to set new targets for greenhouse gas emissions to replace those in the Kyoto Protocol, which expires in 2012. 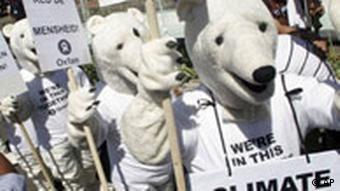 Will all the polar bear activits be happy with the outcome of the conference?

The "roadmap" deal was reached following a dramatic final session of the marathon talks which saw the US delegation drop its objections to the final document.

Head of the US delegation Paula Dobriansky said that 20 hours after the scheduled end of the conference, her country did not want to stand in the way of agreement.

Environmentalist groups said that political leaders meeting in Bali hammered out a deal which launches formal negotiations with a 2009 end date, but the deal falls short in its ambition.

"The Bush administration has unscrupulously taken a monkey wrench to the level of action on climate change that the science demands," said Gerd Leipold, executive director of Greenpeace International. "They're relegated the science to a footnote." 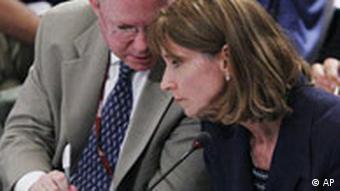 Head of the US delegation, Undersecretary of State Paula Dobriansky (right)

Before nailing down the agreement, developing countries including India and China had expressed concern that they might be forced to accept binding emissions reduction standards. They are not required to accept emission reduction commitments under the Kyoto Protocol, and say that any such commitments would cramp economic growth and curb poverty reduction efforts.

The agreement was reached after Indonesian President Susilo Bambang Yudhoyono and UN Secretary-General Ban Ki-moon urged the delegates to reach a breakthrough.

Ban said he was disappointed by the level of progress at the conference and urged delegates to quickly approve a compromise plan to launch negotiations for a new global warming pact.

"Too much is at stake," he had said. "The alternative to a breakthrough in our efforts here and now is not acceptable."

The negotiations snagged early Saturday over demands by developing nations that their need for technological help from rich nations and other issues receive greater recognition in the document. 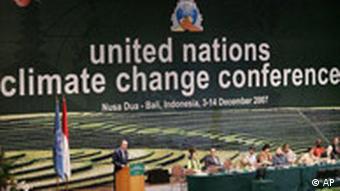 More than 180 countries took part in the UN climate conference

The US delegation had initially rejected these demands, but relented after delegates criticised the US stand and urged a reconsideration.

"I think we have come a long way here," said Dobriansky. "In this, the United States is very committed to this effort and just wants to really ensure we all act together. We will go forward and join consensus."

The decision agreed upon includes a clear agenda for the key issues to be negotiated up to 2009; action for adapting to the negative consequences of climate change -- including droughts and floods -- along with ways to reduce greenhouse gas emissions, to widely deploy climate-friendly technologies and to finance both adoption and mitigation measures.

Concluding negotiations in 2009 will ensure that the new deal can enter into force by 2013, following the expiry of the first phase of the Kyoto Protocol.

"This is a real breakthrough, a real opportunity for the international community to successfully fight climate change," said Indonesian Environment Minister and president of the conference, Rachmat Witoelar. 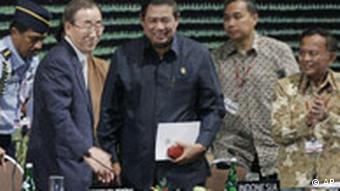 Environmental activist, however, were less optimistic.

Despite the scientific evidence, there is "no clear goal for global emissions cuts" in the Bali roadmap or even a range of emissions targets for developed countries with a guideline for reduction of 25-40 per cent below 1990 by 2020, the group said.

During an emotional showdown in the final hours of the meeting, the US delegation, under intense of pressure, decided to join in the global talks. The price of US participation, however, was a deal weak on substance, said the World Wide for Nature (WWF).

"The US administration was asked to get out of the way, and in the end they bowed to pressure," said Hans Verolme, Director of WWF's Global Climate Change Program.

"The Bali roadmap leaves a seat at the table for the next US president to make a real contribution to the global fight to stop dangerous climate change," he said.

Slow progress at the UN climate conference in Bali

Only hours before the Bali climate conference’s final day, the EU and USA cannot agree on set targets to reduce greenhouse gas emissions. (13.12.2007)

EU Pressures US to Reach Climate Consensus in Bali

Germany's environment minister is leading EU efforts to push the US into accepting climate change targets, warning that if Washington blocks progress in Bali, EU nations will boycott US-led climate talks next month. (13.12.2007)

Most environmental activists flew to the UN Climate Change Conference, leaving behind a huge carbon footprint. But a few took the long road to Bali to make a statement about treading lightly on the earth. (13.12.2007)

Is the outcome of the Bali conference really better than expected? Please include your name and country in your reply.