Four deaths under anesthesia have led to the arrest of a suspected fake doctor in central Germany. The 48-year-old woman had joined clinic staff in 2015 but her lack of medical licensing only emerged in January. 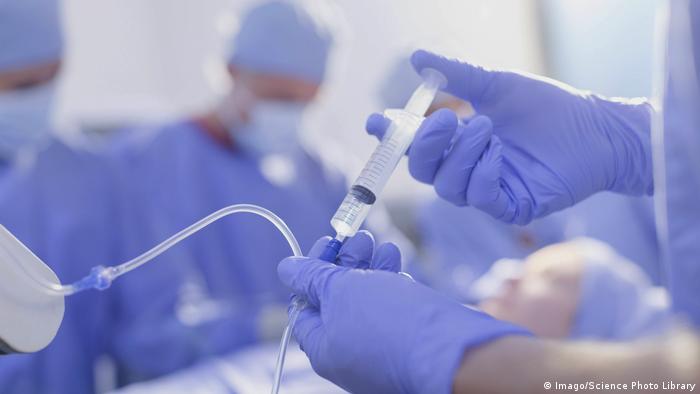 A number of botched anesthesias by a fake doctor led to four patients dying and another eight suffering medical injuries at a clinic in central Germany, prosecutors in the state of Hesse said Saturday.

Prosecutors and police said they were investigating a 48-year-old female suspect on charges of manslaughter, causing bodily injury, falsifying documents, fraud and misuse of a title. German media reported the suspect was arrested on Tuesday.

Among other things, the suspect allegedly failed to identify patients' breathing distress and during operations was responsible for the administering of improper medications.

Police also searched premises in three German states as part of an expanding investigation that began in January.

The region's Hessische/Niedersächsische Allgemeine newspaper reported that the supervisors of the "assistant-doctor" employed in the town of Fritzlar from 2015 until 2018 were also under investigation. It will be examined whether the doctors were negligent when they allowed the suspect to continue applying anesthesia despite repeated failures.

Investigators are also seeking information on whether there were additional victims.

"Further dossiers have been sought, in which the woman played a role," said a manager of Fritzlar's Holy Spirit Clinic, adding that it was assisting authorities in clarifying the circumstances.

Police in the adjacent Hesse town of Homberg an der Efze activated a telephone line for persons able to provide further information.

In reaction, the German Foundation for Patient Protection said it was high time that Germany centrally archived doctors' licenses and required hospitals to use that archive to run precautionary checks.

Eugen Brysch, chairman of the foundation, said it remained "very easy" for people posing as doctors to disguise their lack of licensing because Germany had 17 regional doctors' chambers.

"It's about time that the licensing of a doctor is centrally archived and that an entity be created where hospital operators are required to make queries," said Brysch.

A former nurse in the German state of Lower Saxony is facing charges for the murder of three patients, and is suspected of further involvement in more than 150 deaths. His excuse, according to the prosecution: boredom. (22.11.2014)

Foundation wants burden of proof on clinics, not patients