Christian Lüth, sacked from the far-right AfD party last week, was accused of seriously assaulting a woman earlier this year, a German newspaper has reported. 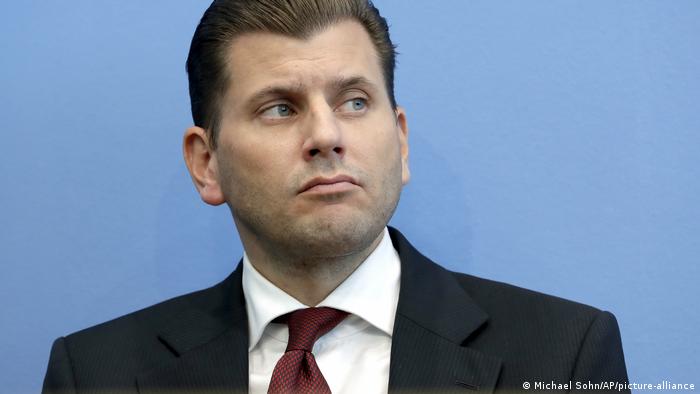 The disgraced former spokesman for the far-right Alternative for Germany (AfD) Christian Lüth seriously assaulted a woman earlier this year, according to charges pressed against him and seen by the Welt am Sonntag newspaper.

The Berlin state prosecutor confirmed to the paper that the charges had been filed in June.

Several leading members of the AfD confirmed that were aware of the accusations as early as March, when party chairman Tino Chrupalla reportedly met with the alleged victim, after which he informed members of the parliamentary group.

A spokesman for parliamentary co-leader Alice Weidel also confirmed that she had been aware of the accusations for months, the paper said.

Lüth was sacked from the party last week after a German TV documentary revealed that he had said of migrants: "We could later shoot them all. That's not at all the issue. Or, gassing, or whatever you want. It's the same to me."

In a statement, Lüth denied he was an extremist and said he had used an "ironic, exaggerated" choice of words. He has not yet publicly addressed the new claims.

Lüth had already been removed from his post as parliamentary press spokesman in April after describing himself as a "fascist" in a chat group.

One high-ranking figure in the AfD, Uwe Junge, parliamentary leader in Rhineland-Palatinate, has called for the resignation of Weidel and co-leader Alexander Gauland over the affair, saying the party was suffering serious reputational damage under their leadership and faced electoral losses.

The ongoing internal turmoil does seem to be having an effect on the popularity of the far-right party, the most successful nationalist party in Germany since World War II.

A new opinion poll published on Sunday showed that it had slipped from first to third place in its strongholds in the eastern German states.

Whereas this time last year the AfD was polling at 24% in the eastern German states, it is now only reaching 18%, according to a poll published in the Bild am Sonntag newspaper.