Germany denies accusations it failed to pay WWII reparations to Greece | Europe | News and current affairs from around the continent | DW | 25.02.2010

Tension between Germany and Greece has risen after offensive doctored photographs have appeared in both countries' media. Some Greek officials have also claimed Germany owes them billions in war reparations. 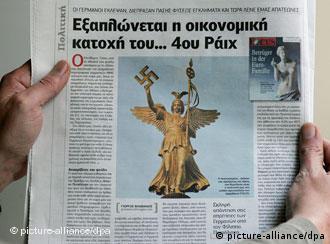 Tensions have been high between Greece and Germany

Germany has rejected recent accusations by a Greek official that the country still owed Greece billions of euros in reparations for World War II.

Greek Deputy Prime Minister Theodoros Pangalos was quoted on the BBC Web site on Wednesday saying that Germany "took away the gold that was in the Bank of Greece … and they never gave it back."

Andreas Peschke, spokesman for the German Foreign Ministry, rejected the accusations at a press briefing in Berlin by saying Germany had paid Greece the equivalent of more than 4.4 billion euros ($5.9 billion) in formal war reparations and compensation for slave laborers.

"A discussion of the past is not of great help in resolving Greece's problems," he added.

Fight in the press

Tensions in German-Greek relations have escalated since German magazine Focus printed a cover image of the famous Venus statue making an obscene hand gesture. The accompanying article called Greece the "traitor" of the euro for its excessive deficit spending. 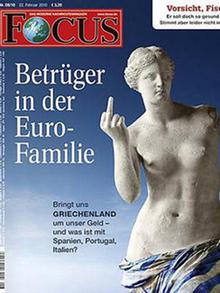 Vassiliki Gergiadou, professor of political science at Panteion University in Athens, said she found the article and picture offensive, and that it placed collective guilt on the Greeks.

"I belong to the group of people who work hard and pay their taxes," she told Deutsche Welle. "How does that make me a 'traitor of the euro family'?"

Stefan Borst, foreign correspondent for Focus, said anyone who read the article should understand it did not engage in "Greek-bashing," but that it simply told the truth about Greece's fiscal irresponsibility.

"One Greek government after another financed a standard of living based on credit, that simply wasn't proportionate to the economic reality," he said.

Greek newspaper Eleftheros Typos responded to the Focus article by printing a doctored photograph of the statue atop Berlin's Victory Column holding a swastika.

The press row led Greek parliamentary speaker Philippos Petsalnikos on Tuesday to invite the German ambassador for a discussion of what he called subjective, simplistic and sometimes inaccurate media coverage, according to Ana news agency.

Much of the tension between Germany and Greece stems from speculation that Germany, Europe's largest economy, will eventually foot the bill of Greece's massive budget deficit.

German newspapers reacted cautiously to the EU's political solidarity with Greece, wary of the potential cost to German taxpayers a bailout could bring. Other papers say inaction carries a far greater risk. (12.02.2010)

The ongoing economic woes of European Union member Greece have shaken the euro zone and have prompted Germany to consider a rescue package to help Athens out of its bind. (10.02.2010)