German newspapers reacted cautiously to the EU's political solidarity with Greece, wary of the potential cost to German taxpayers a bailout could bring. Other papers say inaction carries a far greater risk. 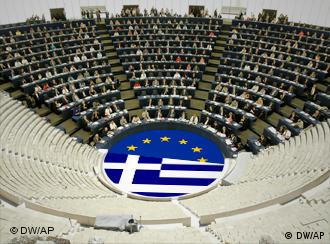 EU leaders pledged support for Greece, but no money

The closely-watched European Union summit in Brussels on Thursday turned out no hard cash bailout for the struggling Greek government. Instead, leaders offered political solidarity and a promised to "take determined and coordinated action, if needed, to safeguard financial stability in the euro area as a whole."

Reactions among German newspapers were largely wary of a financial bailout, which Germany and France are widely expected to spearhead.

Popular German daily Bild offers little sympathy for the Greek government, saying it had "tricked and cheated, and now they're nearly broke." It says ideally Greece would simply drop the euro, but that the chances were nearly zero due to the way the currency agreement was written. "At least the German government has yet to throw fresh tax money at the situation," Bild writes. "And it should stay that way. The Greeks should deal with their own problems."

National daily Frankfurter Allgemeine Zeitung says the fact that EU leaders held off on a cash bailout was "a victory for rationality." The paper refers to German Chancellor Angela Merkel's assurance that "the European Union is not going to leave Greece on its own," and says one could interpret it as "a tranquilizer for the restless markets" or as "a subtle indication of help from abroad." 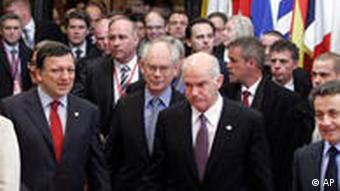 Greece's financial woes may spread to the rest of the Eurozone

Cologne-based daily Koelnische Rundschau showed more support for an emergency bailout for Greece, writing that "the claim that this would create incentives for governments to spend without restraint is foolishness." It says it's ironic that Germany, a nation whose citizens "must slave away until age 67," might bail out Greece, where workers take to the streets to protest the retirement age being raised to 63. But, it writes, "if Europe leaves Greece completely alone, it runs the risk of another Lehman Brothers disaster."

Some European newspapers outside of Germany also place the blame on the Greek government.

Eastern French regional daily Le Republicain Lorrain compares Greece's alleged manipulation of national statistics to "a bad student who has been concealing his poor grades for ten years." But while the problem may stem from Greece, the paper says it has now spread to the entire euro zone: "For any who may doubt: The Greek crisis is a credibility test for the euro."

In Spain, where unemployment currently hovers around 19 percent, the highest in the EU, the Madrid-based daily La Razon highlights the potentially dire consequences of inaction. It called on Paris and Berlin to "lead a movement of compromise and support for Greece on the part of the EU with the instruments available." Allowing Greece to enter bankruptcy would create a situation "that would clobber other European countries in difficult situations, and that would weaken the euro and all that it stands for."

Key EU leaders, including German Chancellor Angela Merkel, have agreed on a plan to assist debt-ridden Greece. The heads of all 27 member countries are to meet later Thursday, where the deal is set to be presented. (11.02.2010)

The agenda for an EU summit in Brussels on Thursday mostly addresses economic growth and unemployment, but observers are paying close attention to how the bloc plans to save ailing Greece from economic disaster. (11.02.2010)

The ongoing economic woes of European Union member Greece have shaken the euro zone and have prompted Germany to consider a rescue package to help Athens out of its bind. (10.02.2010)

Journal # Greece tells EU leaders it will slash spending amid continuing fears over the country's finances # 12.02.2010 08