The war in Ukraine has put projects with Russian museums on hold. But museums in Berlin and the state of Saxony are maintaining some dialogue with Russian colleagues. 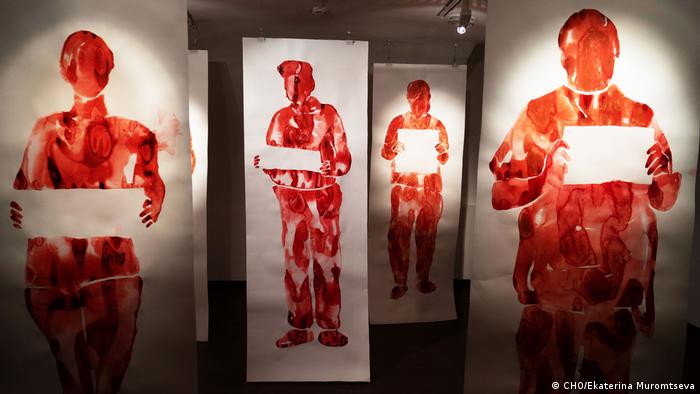 This work by Ekaterina Muromtseva was part of the touring exhibition 'Diversity United,' now interrupted in Moscow

Magnificent tattoos decorate the Siberian horseman's leathery skin. Even 2,300 years after his burial, the nomad's body, necklace and horse are in tact as they were preserved by permafrost.

The mummified rider was supposed to serve as the main attraction of the upcoming special exhibition "Chic! Tassel, Tissue & Tattoo," which opens on April 1 at the State Archaeological Museum in Chemnitz (SMAC) in the German state of Saxony.

But because of the war in Ukraine, the body cannot make its long-planned journey from Novosibirsk to Chemnitz. The mummy has no export permit, and there is no way to transfer loan fees to Russia because of the sanctions. "It's very, very unfortunate," says the exhibition's curator, Karina Iwe. 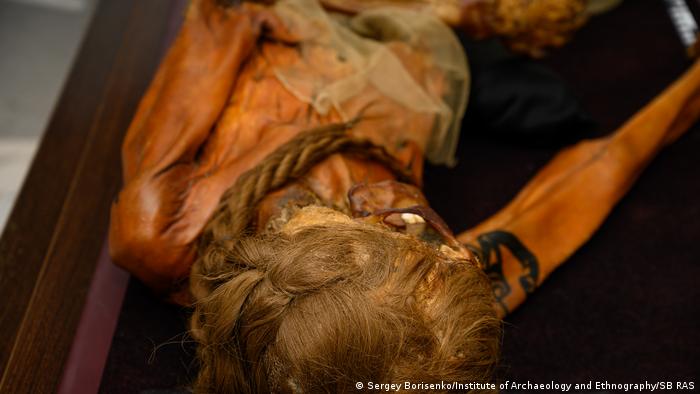 The mummy of the nomad horseman

The exhibition aims to show that throughout the history of humanity, people have crafted ornaments to adorn their bodies — and for diverse reasons. Individuals displayed such adornments to "increase their attractiveness, display their power, conform to norms or indeed protest against them," said Iwe. This makes the tattooed rider a perfect exhibit for the show.

Iwe, who wrote her doctoral thesis on Siberian horseback nomads, is deeply upset by Russia's war against Ukraine. But while all official collaborations with Russian museums are currently on hold, the archaeologist does not want to completely lose contact with her colleagues in the Russian Federation.

Along with her concern for Ukraine, Iwe is worried for her colleagues in Russia, especially those that were among the thousands of prominent academics and cultural workers who signed an open letter of protest against the war that was published online in Russian. 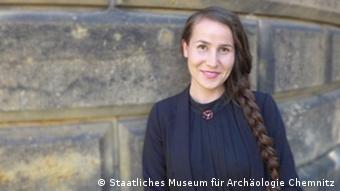 "On March 6, there were already 7,500 signatures, but on March 9 the site was suddenly offline," she explained, saying she is concerned for the fate of some signatories.

"Are they facing jail, fines, dismissal?" she asked.

But even those Russians who oppose the invasion are part of a blanket ban against local museums.

"As good as our cooperation was, we can't just go back to business as usual," said Hermann Parzinger, president of the Berlin-based Prussian Cultural Heritage Foundation, shortly after Russia's attack on Ukraine. Also an expert on Russia, Parzinger halted the foundation's future projects and plans with the country.

Projects on hold but 'we keep in touch'

One of the immediately affected Berlin exhibitions is a tribute to Heinrich Schliemann, the 19th-century German archaeologist and discoverer of Troy who was a Russian citizen and spent much of his life in Russia.

Titled "Schliemann's Worlds," the exhibition is due to open in May at the James Simon Gallery and adjoining Neues Museum in Berlin's Museum Island.

"A Schliemann exhibition without Russia is difficult," says Matthias Wemhoff, director of the Museum of Prehistory and Early History, the collection housed in the Neues Museum.

The exhibition will not be able to travel to Moscow's Pushkin Museum as planned either, Wemhoff said in a blog, adding that plans to pursue the debate on looted art with Russia are also halted.

A lot of trust was built between the German and Russian museums in recent years, says archaeologist Manfred Nawroth, a curator of the Schliemann exhibition. Now they are trying to "somehow save" the deep-rooted cooperation via phone calls, video conferences and emails.

"We keep in touch," Nawroth said, "but on a different basis."

Despite Germany's cultural policy to halt all projects with Russia, "it would be fatal to completely freeze cooperation now," said Nawroth. "I make a distinction between 'putting on ice' and 'freezing' — the former is temporary and of course we hope cooperation will continue again at some point."

The war in Ukraine also ensured an early end to the "Diversity United," a contemporary art exhibition in Moscow's Tretyakov Gallery.

Themes such as tolerance, migration, freedom and democracy were the focus of the touring exhibition that was previously shown in Berlin.

Federal President Frank-Walter Steinmeier withdrew his patronage for the show organized by the Bonn Foundation for Art and Culture.

The "Diversity United" works have since been packed up and are on their way back to their loaners.

"Our intention to build bridges through art, despite all political difficulties, didn't work in this case," organizer Walter Smerling told DW.

In light of Russia's ongoing aggression against Ukraine, it's likely that international exhibitions of contemporary art will not be held in Russia for the foreseeable future, Smerling added.

Meanwhile, Karina Iwe from SMAC in Chemnitz remains in contact with some of her Russian colleagues. And thanks to their preliminary work, the tattooed Siberian rider might still be shown in Chemnitz after all, says Iwe — not the actual body, but at least a projection.