German rights groups and politicians have slammed press restrictions at the upcoming Beijing Olympics as well as the International Olympic Committee's role in a row over Internet censorship for foreign reporters. 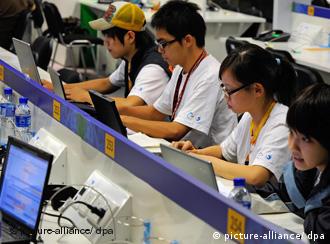 International Olympic Committee (IOC) Chief Jacques Rogge was under mounting pressure on Sunday, Aug 3 after he appeared to renege on previous promises of unfettered Internet access for the thousands of foreign journalists heading to Beijing for the Olympic Games next week. 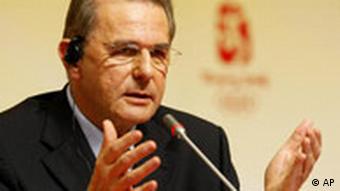 "With his catastrophic crisis management and contradictory information, Rogge has seriously undermined the Olympic spirit and respect for human rights in China," Ulrich Delius, Asia expert at the Goettingen-based Society for Threatened Peoples said on Sunday.

The group, whose Web site is among a number of sensitive sites blocked by the Chinese government, accused Rogge of "caving in" to the arbitrary demands of the Chinese regime and have called on the IOC chief to resign.

At a press conference on Saturday, Rogge said no deal had been cut with Chinese authorities to allow censorship of sensitive sites, after journalists arrived this week to find they could not access a wide range of websites.

But Rogge stopped short of offering an apology despite the flood of criticism after China backtracked on Internet freedoms for the visiting press.

"I am not going to apologize for something the IOC is not responsible for. We are not running the Internet in China," Rogge said.

Amnesty International accused the IOC of serious flaws in their handling of the situation.

"The IOC never really took a clear stance and didn't really press the Chinese to stick to the promises they made on human rights and press freedom," the head of Amnesty International's Germany chapter, Barbara Lochbiler, said in an interview with German newspaper Neue Osnabruecker Zeitung.

Though China has eased restrictions following international criticism of its Internet censorship, many sites such as those of the Falun Gong still remain blocked.

"Censorship a blow against press freedom" 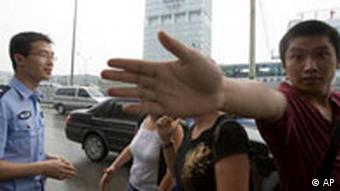 No photos, no questions - China's curbs on press freedom have sparked international condemnation

Leading German newspapers and television stations have castigated what they call censorship by a dictatorial regime.

Berthold Kohler, chairman of the publishing board of the respected Frankfurter Allgemeine Zeitung daily said it was hardly surprising that Beijing wanted to control and restrict media reporting even during the Games.

He pointed out that the Chinese authorities have so far prevented the Frankfurter Allgemeine Zeitung and other international newspapers from being available daily on the stands in Beijing.

Even at the "German House" in Beijing, the papers would be available with the usual two to three-day delay during the Games, Kohler said, adding that the Chinese authorities justified it by saying they needed to first "check" the papers' content.

"This censorship is a blow against press freedom whether it's before, during or after the Olympic Games," he said.

Poettering wants a signal on Tibet

The president of the European Parliament, Hans-Gert Poettering weighed into the spiraling debate on human rights and press freedom at the Olympics on Sunday.

In an article in German newspaper Bild am Sonntag, Poettering called on Olympic athletes to protest against human right violations in Tibet. 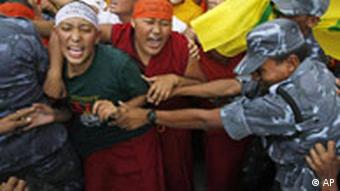 Tibetan exiles in Nepal protest against the Chinese government

"I would like to encourage the athletes, men and women, to look at things as they are, and not to turn away," he wrote in a column. "Each athlete can, in their own way, give a signal. No official should prevent that," he added, insisting that a love of sport and the Olympic Games is no excuse for "blurring our outlook" on human rights.

"It is our duty not to forget the people of Tibet, who are fighting for their cultural survival," Poettering said.

Poettering criticized the pace of talks between Beijing and the Dalai Lama's representatives and highlighted the Tibetan spiritual leader's planned appearance at the parliament in Strasbourg on December 4.

The Olympic Games, which start on Friday and run through until August 24, are being seen by many world leaders as an opportunity to pressure China into rights concessions, particularly with regard to Tibet.

The Olympic Charter prohibits any journalistic work by athletes, but since the Turin Winter Games in 2006, the IOC has been forced to allow blogging during the Olympics -- although not without restrictions. (03.08.2008)

The International Olympic Committee made no deal with China on limited Internet access for the media at the Beijing Olympics, IOC president Jacques Rogge said on Saturday in response to recent speculation. (02.08.2008)

Germany Calls For End of Restrictions on Foreign Media in China