Germany has commemorated the anniversary of the surrender of the Nazis with a choral symphony in Berlin and the opening of a historic submarine yard in Bremen. 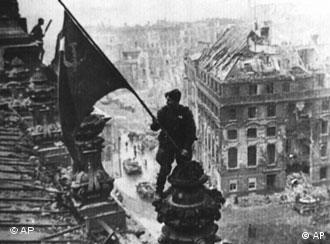 The Nazis surrendered to Allied troops on May 8, 1945

Germans across the country commemorated the 66th anniversary of the end of World War II in Europe on Sunday, with a pan-European performance of a choral symphony in Berlin.

A 1,250-strong choir of singers from across Europe performed "War Requiem" by British composer Benjamin Britten. First performed in May 1962, the masterpiece blends traditional Latin music with the war poetry of Wilfred Owen, a British soldier who died toward the end of World War I.

The War Requiem features three solos, symbolically written for a Russian soprano, and English tenor and a German baritone.

Work on the Valentin Yard, the centerpiece of a 4-square-kilometer (1.5-square-mile) base, began in 1943. British forces heavily bombed it in March 1945 and the Nazis abandoned the project before completion.

Ten thousand forced laborers and prisoners worked at the site on any given day. Harry Callan, an 87-year-old Irishman taken prisoner by the Nazis when he was 17, recalled the 14-hour workdays and brutal treatment by his captors.

"They treated us like animals," said Callan. "We just got food and water and had to work till we dropped."

Events took place across Europe. Some 7,000 people in Austria commemorated the war's end in a ceremony at the Mauthausen concentration camp.

Newly discovered transcripts of secretly recorded conversations of German World War II prisoners of war provide an insight into how the logic of armed conflict turns men into killers. (21.04.2011)

President Christian Wulff has called on Germans to prevent an event like the Holocaust from ever happening again. In an unprecedented speech for a German head of state, he spoke at Auschwitz on Holocaust Remembrance Day. (27.01.2011)