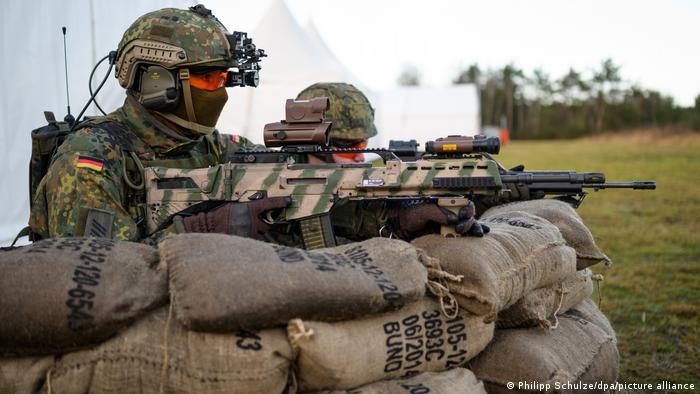 Germany's coalition government and the conservative CDU/CSU alliance on Sunday agreed on the details of a €100 billion ($107 billion) boost to the country's military spending.

After more than three hours of talks in Berlin, both sides finalized the plan to create a special fund for the armed forces.

Defense Minister Christine Lambrecht called it an "urgently needed step." In a statement posted to Twitter, she said: "Finally, we can equip our troops as they deserve and as they urgently need to ensure national and alliance defense."

German Chancellor Olaf Scholz also called the special fund "a huge step" for the security of Germany and Europe. "With 100 billion, we ensure that the Bundeswehr can fulfill its defense mission better than ever before," he wrote on Twitter.

Foreign Minister Annalena Baerbock has welcomed the agreement. It is "a good compromise, one in which we ensure that NATO can rely on us," she said on German public broadcaster Deutschlandfunk on Monday.

The proposal needed a two-thirds majority in both parliamentary chambers, so Chancellor Olaf Scholz sought pre-approval from the center-right opposition parties.

The massive investment in the German armed forces was sparked by Russia's invasion of Ukraine on February 24.

What has been agreed?

A statement from the Finance Ministry published by news agencies said:

"Together, we are ensuring that the Bundeswehr will be strengthened in the coming years with €100 billion in additional investment," the joint statement said.

"In doing so, the so-called NATO 2% target [of GDP on military spending] will be achieved on a multi-year average."

Why is Germany hiking military spending?

He also committed the country to spend 2% of GDP per year on defense, which all NATO members signed up to in 2006 but Germany has yet to honor.

Announcing the move, Scholz said, "It's clear we need to invest significantly more in the security of our country in order to protect our freedom and our democracy."

Germany has often been criticized by the United States and other NATO allies for not investing enough in defense.

Germany had already set aside a budget of €53 billion for the Defense Ministry in 2022, a 3.2% increase from last year.

For the country to meet NATO's 2% target, it would need to spend around €70 billion per year.

If approved by parliament, the additional spending will represent the largest jump in military expenditure since World War II.