Germany Captain Michael Ballack Out for Opener | News and current affairs from Germany and around the world | DW | 08.06.2006 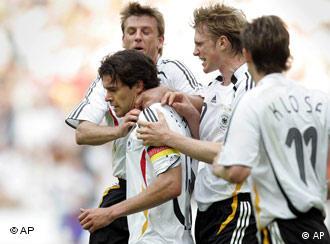 "Michael had to stop practice on Wednesday," Klinsmann said before the team flew from its base in Berlin to Munich. "It does not look like he'll be able to play. We hope he will be available for the second game."

The 29-year-old midfielder has been struggling with a calf injury he sustained during a training match against Colombia on Friday. Team doctors are reported to be treating the injury and Ballack will fly with the team to Munich to continue therapy.

"The important thing now is to look ahead," Klinsmann added. "We want a fully fit Michael Ballack, not a 50 percent player. Fingers crossed he'll be back training soon."

Much has been made of Ballack's importance to the German side in the months leading up to soccer's month-long showcase, but team officials are confident Tim Borowski or Sebastian Kehl will be able to help hold down the midfield against an underdog Costa Rica squad.

"It is the first match and we are a bit nervous but we have done our homework and I think we are in a position to beat Costa Rica," assistant coach Joachim Löw told reporters this week. "If we turn up and show our strengths we will win the match."

Germany's second group round game is against Poland on June 14 in Dortmund.

The World Cup, which starts Friday, will be the culmination of two years of hype that has left no marketing stone unturned. For "true" fans, it has become capitalistic excess and some are rebelling. (June 8, 2006)