Germany is dependent on Russia for some 40 percent of its natural gas, and the amount is set to grow, experts warn. At the same time, promising energy resources in Central Asia are being neglected. 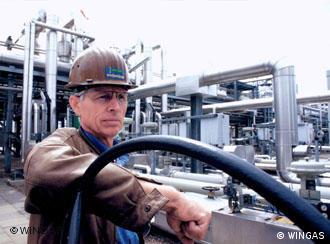 For Moscow the decision to allow a foreign company direct access to the natural gas source is an exception to the rule. Instead of opening up its energy sector, the Russian leadership is focusing more on a "creeping re-nationalization," according to Klaus Umbach of the German Council on Foreign Relations (DGAP.) The latest sign of this "disquieting trend" was made more clear during the Yukos affair. Yukos oil company got slapped with a lawsuit and a huge bill for back taxes when company founder Mikhail Khodorkovsky made signs of standing up to the government.

According to Friedemann Müller, energy expert at the German Institute for International and Security Affairs (SWP), German-Russian cooperation is above all a result of desperation in the Russian energy sector. "Foreign investment is desperately needed," Müller told DW-WORLD.

According to experts, Russia needs more than $600 billion (€472 billion) in investments in order to whip its energy sector into shape. Ramshackle pipeline networks need to be revamped and brought up to date, outdated delivery systems need to be replaced.

Costs are not being spared -- in the end, the future of European energy provision is at stake. In the middle-term, Russian natural gas is needed, while coal and oil are becoming less and less important. Chancellor Gerhard Schröder has personally accelerated cooperation with Russia on energy policy. Already, 40 percent of Germany's natural gas needs are met by Russia.

While the European Union may for the time being produce around two-thirds of its necessary natural gas -- above all in the UK and the Netherlands, some 60 percent of the remainder is imported from Russia.

"The increasing dependence on Russia is dangerous," cautioned SWP expert Müller. And he is not alone in his warnings. Already in November 2000, the European Commission warned that the EU needed to move "toward a European strategy of energy security"

According to Müller, however, "the argument was simply ignored by the individual EU states."

But there are cogent arguments in favor of such a strategy. In a political crisis, Russia could exploit its leading role in the European energy market and disturb its pipeline workings as a means of exerting pressure, Umbach from the DGAP said.

Moscow already sees its energy policies as an important instrument of its foreign and security policy. In addition, in order to reach its growth goals, Russia needs to set very high oil and gas prices in the coming years. This will above all affect consumers.

And energy expert Müller sees another problem: Europe is the biggest import market for natural gas, and its needs are increasing quickly. "Russia doesn't have the capacity to meet Europe's long term needs," he said.

Given that, some say it is disconcerting that Europe is becoming yet more dependent on Russian gas. By 2020 the natural gas deposits in the North Sea are expected to be all but depleted. On the other hand, Germany's decision to shut down all its nuclear power plants by 2020 means there will be a huge need for other sources of energy. Currently, nuclear energy provides a third of the country's entire electricity.

"Renewable resources cannot compensate for that, not by a long shot," Müller said. Like Umbach, he calls for the region to "diversify" its import structure. Russia is important, no question, he said. But diversifying sources for natural gas from different regions, such as North Africa and Iran, could undermine the Russian monopoly on natural gas provision for Europe. This would also create more competition, which could drive down prices.

According to Umbach and Müller, the future lies in Central Asia and the southern Caucasus. Turkmenistan, Azerbaijan, Kazakhstan and Uzbekistan all have important natural gas reserves The region is closer to Europe, and prospecting there would be cheaper, said Müller.

Plans for an affordable pipeline to Europe are already in the works. "But Europe and the German government haven't made any moves" toward making it a reality, Müller criticized. He points to the strong influence of the big energy providers.

Ruhrgas, one of the most important energy providers in Germany and a former monopoly, is closely tied to energy giant Gazprom. But another reason for the lack of European action in developing other energy sources is the tight partnership between the German government and Russian President Putin, a man no one wants to risk rubbing the wrong way.

Germans have to dig deeper in their pockets to turn on lights, do a load of laundry, or heat their homes with electricity, than any other nation in Europe. (Sept. 16, 2004)