A man detained over the attack on the Dortmund soccer team's bus was a member of "Islamic State" in Iraq, authorities have said. Investigators said later that the man was no longer a suspect in the Dortmund explosions. 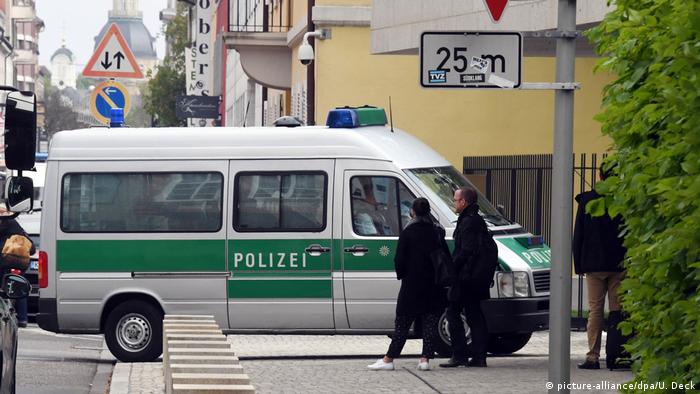 A judge on Thursday issued an arrest warrant for an Iraqi formerly suspected of involvement in a series of explosions near Borussia Dortmund football team's bus, saying he is instead suspected of being a member of the so-called "Islamic State" (IS) militant group operating in Iraq.

German federal prosecutors earlier announced they were unable to find any evidence  linking the Islamist suspect to the triple blast that shook Germany on Tuesday evening.

"The investigations have so far resulted in no proof that the suspect had taken part in the attack," the authorities said in statement, adding that he was a member of a "foreign terrorist organization," and that an arrest warrant was being sought on that ground. He allegedly led a unit of 10 commandos who carried out kidnappings and executions.

Read: Humanity prevails as football fans stand together in Dortmund

The suspect, identified only as Abdul Beset A. due to German privacy laws, was set to appear in court later on Thursday. The judge must then decide whether or not to issue the warrant. Without it, prosecutors cannot hold him for longer than 24 hours.

The 26-year-old reportedly left Iraq and traveled to Turkey in March 2015 before continuing on to Germany, where he maintained his contacts with jihadists. He was apprehended in the city of Wuppertal, some 50 kilometers (30 miles) from Dortmund.

Islamist claim of responsibility for the attack

On Tuesday evening, the bus carrying the Dortmund team to a Champions League match with AS Monaco was targeted by three explosions left on the road near the vehicle's path. Spanish defender Marc Bartra was injured by flying shards of glass and required surgery, but no one was killed in the attack.

Authorities discovered two letters claiming responsibility for the attack. One, which was attributed to the far-left movement Antifa, was likely a fake, a spokeswoman for Germany's federal prosecutor said. The other, which said the attack was carried out "in the name of Allah, the merciful," and blamed Chancellor Angela Merkel for "murdering Muslims," in Syria, was being investigated by authorities.

A second suspect was also detained on Wednesday, but police later released him due to lack of evidence.

Dortmund went on to lose the rescheduled game to Monaco on Wednesday night, prompting anger from coach Thomas Tuchel who blasted Champions League organizer UEFA for not giving the team "a bit of time to deal with it" [the attempt on their lives.] He said they had been treated "as if a beer can was thrown at the bus."

Authorities are probing an Islamist background to the attack on the Borussia Dortmund team bus on Tuesday. A letter claiming responsibility reportedly mentions military operations in Syria and Angela Merkel by name. (11.04.2017)