Germany and Iran Embroiled in Diplomatic Spat | Germany| News and in-depth reporting from Berlin and beyond | DW | 28.04.2004

In response to a contoversial plaque unveiled in Berlin last week, Tehran plans to post signs accusing Germany of supplying Saddam Hussein with chemical weapons during the Iran-Iraq war. 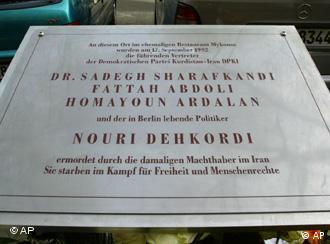 Just a few names and words are enough to ignite a diplomatic crisis.

Visitors to the German embassy in Tehran will soon walk past a denunciatory plaque hanging outside the building's gate, reminding all who enter that Germany contributed to Saddam Hussein's chemical weapons arsenal and shared responsibility for the death of thousands of Iranian soldiers in the Iran-Iraq war during the 1980s.

Tehran's city council gave the order to put up the plaque on Tuesday in retaliation for last week's unveiling of a memorial in the Berlin neighborhood of Charlottenburg which accused Tehran of murdering four Iranian Kurdish dissidents at the Mykonos restaurant in 1992.

The 50 centimeter by 70 centimeter plaque in the upscale Berlin district carries the names of the victims of the bloody attack and the words: "Murdered by the regime in Iran at the time. They died fighting for freedom and human rights." 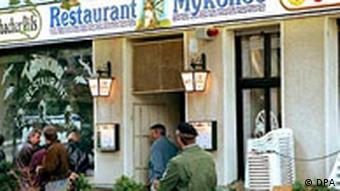 The Greek restuarant Mykonos was the scene of a bloody assasination of four Iranian Kurds on Sept. 17, 1992.

The accusation on the Mykonos plaque refers to a German court ruling from 1997 that concluded the killers of the four men were acting on Tehran's orders and that Iran was guilty of practicing state terrorism. Iran denied any involvement, but the German government recalled its ambassador and suspended dialogue with the Islamic republic for a year after that.

Only one day after the unveiling ceremony in Berlin, Germany's ambassador to Iran, Paul von Maltzahn, was summoned to the foreign ministry to listen to Tehran's "strong objection" to the plaque.

On Thursday, authorities closed down a German government-funded language institute in Tehran, allegedly because the center did not have the necessary permits to operate. The organization -- similar to the Goethe Institute in other countries -- had been running since 1996 and employed 25 teachers to teach some 3,000 pupils.

Diplomats in Tehran have said the school's closure is in direct response to the Mykonos memorial. They said that the institute's permit was issued in 1996 and limited to just four years, but the center had been operating without official permission since 2000. It wasn't forced to close until two days after the controversial plaque was hung in Berlin.

The diplomatic tit-for-tat reached a highpoint on April 27, when the Tehran city council ordered two memorial plaques -- one near the German embassy and the other at a sanatorium for victims injured by Iraq's chemical attacks -- to be posted blaming Germany for supplying Iraq with chemical weapons during the eight year Iran-Iraq war.

"These plaques are to disclose crimes of the countries that produce chemical weapons," the council's chairman Mehdi Chamran was quoted as saying by the official Islamic Republic News Agency.

"We impeach Germany ... as a partner of Saddam and one of the most important providers of chemical weapons to Saddam's repugnant regime," he said.

Tehran's hardline mayor, Mahmoud Ahmadinejad, justified installing the denunciatory signs as "the least we can do to defend the rights or our nations."

Along with several Western and Arab states, Iran has accused Germany of providing Iraq with key technological assistance for the production of chemical weapons used against Iranian soldiers between 1980 and 1988. Close to a million people -- mostly Iranians -- were killed during the fierce fights along the border.

Despite the tense atmosphere, sources in Teheran have told Deutsche Welle that the diplomatic spat may be cooling down and that the language institute will most likely re-open in the next few days as Germany's foreign ministry distances itself from the Mykonos plaque.

In an interview published Monday with the German ambassador in Tehran, Maltzahn told the Iranian newspaper Keyhan that the German foreign ministry did not approve of the Berlin plaque. He criticized it for damaging otherwise congenial German-Iranian relations.

The EU has criticized Iran's recent parliamentary elections as a "setback for democracy," and said there will be implications for trade relations. The EU opposes the exclusion of reformist candidates in the elections. (Feb. 23, 2004)