Germany Agrees to Expanded Military Role in Afghanistan | Germany | News and in-depth reporting from Berlin and beyond | DW | 06.02.2008

Germany will deploy around 200 combat soldiers in northern Afghanistan, but will not move its troops to the country's more violent south, German Defense Minister Franz Josef Jung said on Wednesday, Feb. 6. 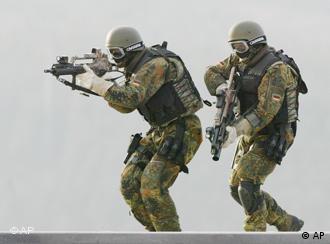 Additional German troops will arrive in Afghanistan this summer

German troops will be sent to replace the Norwegian contingent scheduled to leave Afghanistan this summer. German Defense Minister Franz Josef Jung confirmed the deployment at a press conference, saying that it was important to maintain the quick response force.

"NATO has made the request," Jung told a news conference. "We have decided after consultation with the military that we cannot allow a gap to develop."

Under current mandates, Germany can station up to 3,500 troops in northern Afghanistan as part of the 40,000-strong NATO International Security Assistance Force.

Venturing outside the "safe zone" 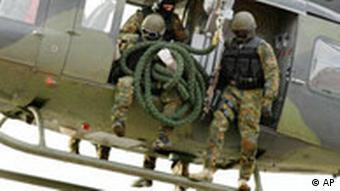 German troops have stayed mainly in the North

The Quick Reaction Force will be the first combat unit Germany sends to Afghanistan. Most of the 3,200 Bundeswehr soldiers serving with the NATO-led International Security Assistance Force (ISAF) are involved in reconstruction work in the relatively peaceful northern part of the country and near the capital of Kabul.

The new mission might take troops out of this relative safe zone. In the two years that the Norwegians were responsible for the Quick Reaction Force, their troops were deployed only once outside of the regional northern command.

Jung said that the German Quick Reaction Force would do the same.

"If our friends are in an emergency situation, we will help them," Jung said. 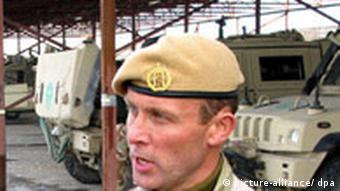 NATO defense ministers meet on Thursday and Friday in Lithuania to discuss the Afghanistan mission. The US and Britain want other NATO members to share more responsibility for stationing troops in the south of the country, where most of the fighting against al Qaeda is taking place.

US Secretary of State Condoleezza Rice, in London on Wednesday, said very few NATO countries had troops in Afghanistan's most dangerous regions.

"We believe very strongly that there ought to be a sharing of that burden throughout the (NATO) alliance," Rice said.

Britain announced it would maintain its current level of 7,800 troops in Afghanistan. The US has 29,000 military personnel in Afghanistan, about half of them attached to the NATO mission.

Stretched to the limit 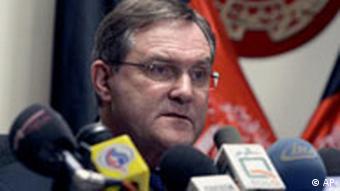 Berlin has consistently rejected those calls. Germany's military capacity is stretched to the limit and the country wants to finish the work it started in northern Afghanistan, the government says.

"We see our responsibility as being in northern Afghanistan," deputy government spokesman Thomas Steg told reporters in Berlin. "That's where we aim to be successful, and that's how it will remain."

Germany does not expect the issue of troop deployments to add tension to its ties to the United States other NATO members, according to Steg.

"This is not a bilateral question directed at German-US ties," he said, adding that a request for more troops from US Defense Secretary Robert Gates was sent to several European NATO members.

A call for more development aid 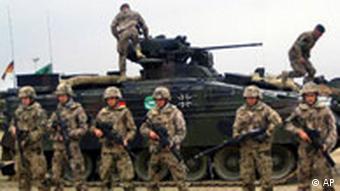 The German public remains largely opposed to increasing the Bundeswehr's commitments in Afghanistan. A Forsa survey on Wednesday showed that 85 percent of those polled were against sending troops to the south.

Politicians are divided over whether Germany should play a bigger role in southern Afghanistan.

Oskar Lafontaine of the Left Party said the Quick Reaction Force is a way for the government to further entangle Germany in an unjust war. The deployment "opens the door for a combat mission in all of Afghanistan," Lafointaine said.

The Executive Director of Medico International, an aid group working on human rights and health, also criticized the decision.

"Everyone knows that the problems in Afghanistan cannot be solved with combat operations," Thomas Gebauer said.

Past experience has shown that military escalation worsens the security situation, according to Medico. If the violence is to end, Afghanistan needs peace, rebuilding and development. Germany spends 530 million euros ($785 million) on military operations but only 100 million euros on reconstruction, Gebauer said.

Afghans say foreign troops have helped make the region significantly safer, according to results of a survey released on Wednesday.

Two out of three Afghans in the northeastern part of the country said that they feel "much safer" than they did two years ago. A full 99 percent said they felt safer.

"The improvement is largely attributed to the presence of foreign troops," according to the poll conducted in February 2007 by researchers from Berlin's Free University.

The study found that four of every five of the 2,000 Afghan households surveyed felt foreign troops have had a positive impact on their physical security. The Afghans had an equally positive view of their national government.

Germany should expect US pressure to continue unless Berlin expands its Afghanistan military mission, a key official said. The Defense Ministry plans to decide on a US request to widen combat operations on Wednesday, Feb. 6. (06.02.2008)

The debate in NATO about troop commitments to Afghanistan is expected to figure prominently in the annual Munich Security Conference that opens in the Bavarian capital on Friday, Feb. 8. (04.02.2008)

The international community has poured plenty into Afghanistan with little result, but the country needs even more to attain peace, writes DW's Peter Philipp. Only then can it avoid becoming a "failed state." (01.02.2008)

Why do you think many NATO countries won't send troops to sourthern Afghanistan? Don't forget to include your name and country in your reply.