Germany a Step Closer to Ratifying Lisbon Treaty | Europe | News and current affairs from around the continent | DW | 08.10.2008

Germany has moved a step closer to ratifying the Lisbon Treaty, which would reshape the European Union, with German President Horst Koehler saying through a spokesman Wednesday he has approved the document. 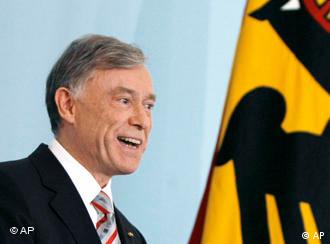 Berlin and other major EU members have pushed ahead with their own ratification work, despite the treaty's ratification being stalled by Ireland, where a referendum last summer rejected it.

Ireland's rejection of the treaty, which is designed to make the EU more efficient and comprehensible to voters, meant the treaty could not come into effect, even though the parliaments in 18 member states had already voted to ratify it.

The Irish result sparked debate across Europe on how the 27-member bloc would proceed, with European heavyweights such as Germany's Chancellor Angela Merkel and France's President Nicolas Sarkozy urging the remaining member states who had not yet ratified it to do so.

Koehler's Berlin office has its own legal team which reviews laws and treaties. His spokesman, Martin Kothe, told news agency dpa that "after extensive examination" Koehler had found that document raises no significant constitutional concerns.

However, he had not formally signed off on it, Kothe said of the act that would finalize German ratification.

Koehler said he would wait for German Federal Court rulings on cases brought by Germans who oppose the treaty. The verdicts are not expected until next year.

Both houses of parliament in Germany overwhelmingly approved the treaty earlier this year.

EU Secularism Behind Irish No to Lisbon Treaty, Says Cardinal

A day after a senior churchman cited EU hostility to religion as a reason for Ireland's resounding "no" to the EU's key reform treaty in June, the country's Europe Minister said a second Irish vote may be necessary. (25.08.2008)

The problem with EU jargon is that you need both a political dictionary and a map to understand it. Here is a brief list of the EU's more obscure place-names and a explanation of the processes they refer to. (17.08.2008)

German Chancellor Angela Merkel expressed confidence that the European Union's Treaty of Lisbon will be implemented despite its rejection by the Irish electorate in a referendum last month. (24.07.2008)