Germans Urge Obama Not to Call for More Troops in Afghanistan | Germany| News and in-depth reporting from Berlin and beyond | DW | 22.07.2008

German politicians Tuesday urged Barack Obama not to call for greater troop contributions from Europeans in Afghanistan when he outlines his plans for US foreign policy in a major speech in Berlin on Thursday. 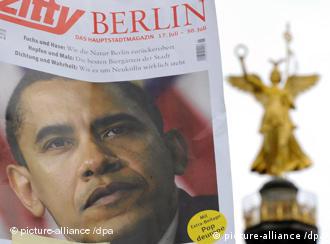 The real Obama will speak near Berlin's Victory Column on Thursday

"It makes no sense to make demands that partners cannot fulfil," Rainer Arnold, a parliamentary defense spokesman for the Social Democrats (SPD), told the online edition of Der Spiegel news

The SPD, the junior partner in Chancellor Angela Merkel's broad coalition, has made clear that the additional 1,000 troops to be made available for Afghanistan, taking the deployment to a maximum 4,500, is as far as they are prepared to go.

Obama is widely expected to call for a greater European contribution to the NATO military effort in Afghanistan when he speaks on Thursday on how US foreign policy will look if he is elected president.

Eckart von Klaeden, foreign policy spokesman for Merkel's Christian Democrats (CDU), noted that the Illinois senator had made several calls for US allies to make a greater military contribution.

"There will be questions in the US if he says nothing on Iraq and Afghanistan during his most important speech on the continent, especially as he has just visited both countries," von Klaeden said.

Berlin was gearing up for the Obama visit, with city authorities preparing a large open-air venue on the boulevard running from the city's Victory Column to the Brandenburg Gate.

Officials said they were expecting anywhere between from 10,000 to one million people to turn out to hear him speak.

A recent poll found that more than 70 percent of Germans would back Obama to be the next Democratic Party president.

Large screens were to be set up along the route, which is also used as Germany's fan zone in major soccer contests.

After much debate, presumptive US presidential candidate Barack Obama will speak in front of Berlin’s Victory Column on Thursday. "Obamania" in Germany is now in full swing as the country awaits a political rock star. (21.07.2008)