Obama to Speak on Trans-Atlantic Ties at Berlin′s Victory Column | Germany | News and in-depth reporting from Berlin and beyond | DW | 20.07.2008

Barack Obama's team has confirmed the presumptive US Democratic presidential candidate, hugely popular in Germany, will give a speech at Berlin's Victory Column next week focusing on strengthening trans-Atlantic ties. 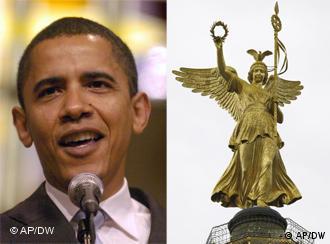 The historic partnership between Germany and the US will form the centerpiece of Obama's speech at Berlin's Victory Column next week, his team confirmed in Chicago on Sunday, July 20. The speech, they say, will focus on the need to strengthen trans-Atlantic relations to meet 21st-century challenges.

Obama is set to meet with German Chancellor Angela Merkel and other top politicians on Thursday, July 24 before giving an hour-long public speech at Berlin's gold-topped Victory Column, about a mile from the historic Brandenburg Gate.

The US presidential contender, hailed as the new John F Kennedy in Germany, is hugely popular in Germany. A poll published this month in Bild newspaper showed 72 percent of Germans would vote for him if they could. 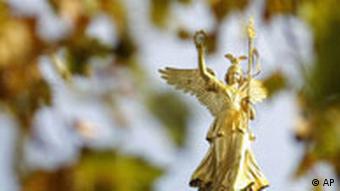 Berlin authorities expect up to a million people to show up at the Strasse des 17 Juni between the Brandenburg Gate and Victory Column, or Siegesaeule, to hear Obama speak. His speech is scheduled at around 7 p.m. on Thursday.

German media have reported that authorities plan to set up an Obama "fan mile," similar to arrangements during the European soccer championship and the soccer World Cup two years ago to allow thousands to watch the event on big screens.

After seven years of George W. Bush -- a deeply unpopular US president in Germany -- Europeans are lapping up the Illinois senator's message of change.

Analysts say Obama, if elected US president, could inject a new momentum into diplomatic relations with Germany which have improved since Chancellor Merkel took office.

Though Berlin is abuzz with excitement about Obama's visit, the venue for his much-anticipated speech follows weeks of speculation and controversy in Germany.

Obama is believed to have originally wanted to hold his speech at the Brandenburg Gate. However, German Chancellor Angela Merkel made clear she was against "electioneering" by Obama at the historic monument and a symbol of German unity. 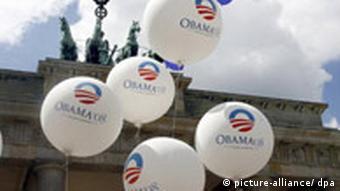 Her comments put her at odds with Foreign Minister Frank-Walter Steinmeier who said he would welcome an appearance by Obama at the Brandenburg Gate.

Obama's team decided against Tempelhof airport, the site of the Berlin airlift, and opted instead for the Victory Column.

"The Siegessaeule in Berlin was moved from the Reichstag (German parliament) to its current position by Adolf Hitler," Rainer Bruederle, deputy chairman of the opposition Liberal Party, FDP, said in an interview with Bild am Sonntag. He said he questioned, "if Barack Obama has been well advised to use it as the site of a speech outlining his vision of a world of cooperation."

The same paper quoted Andreas Schockenhoff, deputy chairman of the Christian Democrats in parliament, criticizing the "unhappy symbolism" of the venue.

"The Berlin Victory Colum is dedicated to victory over neighbors who today are our European friends and allies," he said.

Obama's planned speech in Berlin has also sparked a row in the US with a foreign policy aide to John McCain, the Republican presidential candidate, saying it was an "election show."

Referring to the controversy over the venue for Obama's speech, Randy Scheunemann told German news magazine Der Spiegel this week that Obama had put "a close American ally in an unpleasant position," with his decision to take his campaign abroad.

Obama is in Afghanistan Sunday as part of a whirlwind tour abroad that will also take him to Iraq and the Middle East. After speaking in Berlin on Thursday he is to visit France and Britain.

Though Obama is expected to stress a more multilateral approach on foreign policy than the current Bush administration, experts warn he will still have to tackle difficult issues, for example on world trade and Afghanistan. 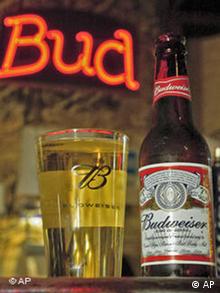 Obama's Budweiser comments have generated some concern in Europe

Some of Obama's comments about reforming the North American Free Trade Agreement (NAFTA) have caused worry among Europeans. Obama recently said that he felt it was "a shame" that Belgium-based brewer, InBev NV would take over the iconic Budweiser label.

This week, Europe's top trade commissioner, Peter Mandelson, called on Obama to stop "crowd-pleasing rhetoric" which could be interpreted as anti-trade.

In an interview with Bloomberg Television, Mandelson called on both Obama and likely Republican candidate John McCain to "acknowledge the huge benefits for the American economy and the American people of continued trade growth.''

Jan Techau told dpa that Obama still hadn't spelt out his stance on a number of thorny issues.

"Iraq, Afghanistan, Iran and missile defense - these are the issues, although he hasn't named them," Techau said. "This will be the most important part of the speech. Europeans are going to find out whether the love affair with Obama is going to be sustainable."

Authorities in Berlin said that US presidential candidate Barack Obama is welcome to make a speech at the city's historic Brandenburg Gate despite reservations by Chancellor Angela Merkel. (13.07.2008)

Europeans welcomed the news that the Democratic presidential hopeful would visit Berlin and other major European cities this month. But Jefferson Chase says Obama's main task will be to avoid seeming too Euro-friendly. (09.07.2008)