Germans still to drink too much alcohol, study finds 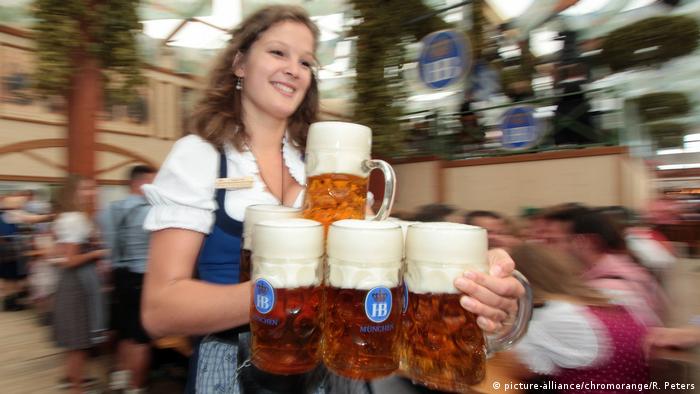 Germans drank on average 131.3 liters (34.7 gallons) of alcoholic beverages in 2018, according to a study published by the German Center for Addiction Issues (DHS) on Wednesday.

"This quantity is roughly equivalent to a bathtub of beer, wine, sparkling wine and spirits," the DHS said in its annual "Almanac on Addiction."

The study also found that 3 million Germans between the ages of 18 and 64 had an alcoholic disorder in 2018.

Around 74,000 deaths per year in Germany are caused by alcohol or a combination of alcohol and tobacco, according to the study.

"Experts point out in the [study] that alcohol consumption is always risky," the DHS said. "Therefore, as little or no alcohol as possible should be drunk."

Drinking more than most

In 2017, the study said, every German above the age of 14 drank 10.5 liters of pure alcohol, a slight decrease from 10.6 liters per person the year before.

Norwegians aged 15 and above, by comparison, consumed only six liters of alcohol per person.

"Germany is still one of the high-consumption countries internationally, despite declining consumption," the DHS study said.

According to the World Health Organization, Germany ranked fourth in the world in pure alcohol consumption per capita, behind only Moldova, Lithuania and the Czech Republic.

Dr. Tobias Effertz, a health economist, estimated in the DHS study that the economic cost of harmful alcohol consumption sits at €57.04 billion ($61.97 billion) per year. Government tax revenue from alcohol was €3.185 billion in 2018, the study points out.

Germans smoked a total of 74.6 billion cigarettes in 2019, an average of 900 cigarettes per capita. That was a slight increase of 0.3% from the year before.

However, the number of men and women smokers in Germany has been on the decline, the study said. As has smoking among young people, which the study says has been declining for 15 years. The study attributes the latter to tobacco control measures.

Dependence on and abuse of medicine has continued to increase, the study said, particularly in terms of misuse of unnecessarily high doses of medications. The study estimates that between 1.5 million and 1.9 million Germans are addicted to prescription drugs, particularly sedatives, sleeping pills and non-opioid painkillers.

When it comes to illegal drugs, the study says 15.2 million adults between 18 and 64 and adolescents between the ages of 12 and 17 have admitted to trying an illegal drug once in their lives.

Cannabis remains the most popular illegal drug consumed, according to the study. It observed that, while cannabis consumption among young people declined in the 2000s, usage has increased since 2011. In 2018, 8% of adolescents between 12 and 17 consumed cannabis.