Germans Protest Against Ahmadinejad, Racism As Cup Opens | Germany | News and in-depth reporting from Berlin and beyond | DW | 11.06.2006

Thousands took to the streets in two German cities, both World Cup venues, over the weekend to protest against Iranian President Ahmadinejad and a far-right march. 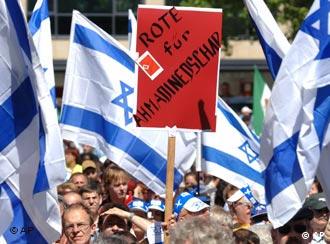 Demonstrators in Nuremberg protest against anti-Semitism and Ahmadinejad

Some 1,200 people joined a rally against Iranian President Mahmoud Ahmadinejad in the southern German city of Nuremberg on Sunday, ahead of a World Cup match between Iran and Mexico. 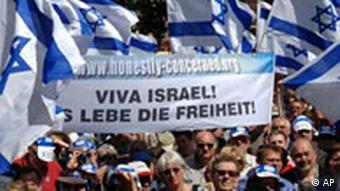 Demonstrators in Nuremberg on Sunday

Waving Israeli flags, the demonstrators attacked Ahmadinejad's anti-Israel rhetoric and repeated denial of the Holocaust at the protest organized by the local Jewish community and the German trade union alliance.

Bavarian state interior minister Günther Beckstein said the demonstration was not targeted against the Iranian team or the Iranian people but against "a man who has placed himself outside civilization."

"A criminal like Ahmadinejad is not welcome (in Germany)," he said. "Let us show that Bavaria and Germany as well as the entire Western world stand firmly by Israel and our Jewish fellow citizens."

Police said the event went off without incident.

Ahmadinejad has been widely condemned for describing the
Holocaust as a "myth" and calling for Israel to be "wiped off the map". 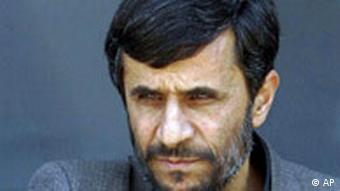 Ahmadinejad's comments about the Holocaust have sparked anger worldwide

He has said he would like to attend the soccer ball extravaganza running through July 9 but has made no firm plans. A source close to him said he would be watching Sunday's game on television in his office in Tehran.

Iranian Vice President Mohammad Aliabadi was granted a German visa and visited the Iranian team in Nuremberg Saturday ahead of their first World Cup match Sunday.

Michel Friedman, a television presenter and high-profile member of Germany's Jewish community, told the rally it was scandalous that Aliabadi had been allowed to enter the country.

Charlotte Knobloch, the newly appointed head of Germany's Central Council of Jews said she was worried about an "explosive anti-Semitic alliance."

Writing in an article in Bild am Sonntag, Knobloch pointed out that neo-Nazis in Germany wanted to use a game between Iran and Angola on June 21 in Leipzig to "declare their solidarity with the tyrant from Tehran." Knobloch warned that Germany couldn't just watch events idly. 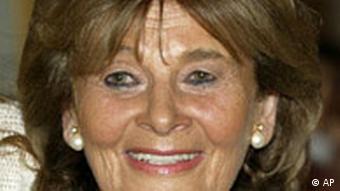 "We have to prevent that the enemies of the constitution and the Iranian dictator don't join forces to form an anti-Semitic alliance," Knobloch wrote.

Earlier, police broke up a pro-Iranian rally by neo-Nazis in Nuremberg, a former Nazi stronghold. The 16 men and women there were dressed in Iranian jerseys, hoisting Iranian flags and distributing flyers demanding that the demonstration against Ahmadinejad be banned, police spokesman Peter
Grösch.

Amid the controversy, Iran coach Branko Ivankovic told reporters Saturday to stop asking him about politics.

"These political questions are not for me. I think it's not for
me and it's not for people here. Please just ask about my team against Mexico," said the Croatian.

Standing up against racism

Separately, German politicians and celebrities joined thousands of citizens and activists in the western German city of Gelsenkirchen on Saturday to send a strong message against neo-Nazism and xenophobia.

The Gelsenkirchen event was meant to counter a march planned by the far-right National Democratic Party (NPD) on Saturday, a day after the city of Gelsenkirchen hosted an opening World Cup game between Poland and Ecuador. 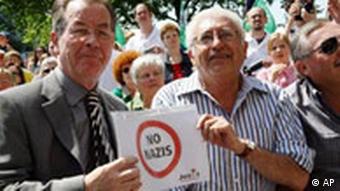 Müntefering and the ambassador of Ecuador Horacio Sevilla Borja

Addressing the estimated 5,000 people who gathered in Gelsenkirchen to protest against the far-right, Germany's Vice Chancellor Franz Müntefering accused the NPD of wanting to hijack the soccer World Cup in Germany to sow xenophobia.

"This brown sauce should never again get a chance in Germany, never again," said Müntefering. "We want all people to be able to live here in Germany irrespective of their skin color, passport, name and religion. No one should be scared," he said.

Müntefering's comments follow warnings last month by a former government spokesman who now heads an anti-racist organization that black soccer fans visiting the country during the World Cup should avoid going to areas where neo-Nazi attacks had taken place.

His remarks triggered fierce debate in Germany about so-called no-go areas for dark-skinned foreigners and were followed by a suspected racist attack on a politician of Turkish-Kurdish origin in eastern Berlin.

A string of other racist attacks in the east of the country have also put the country on edge.

President of Germany's parliament, the Bundestag, Norbert Lammert, underscored the importance of the anti-neo-Nazi demonstration on Saturday at a time when the world is looking at Germany and particularly Gelsenkirchen which hosts a number of World Cup games. 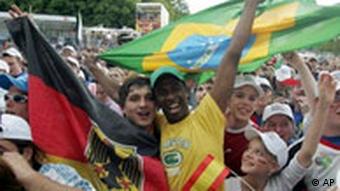 "World attention won't focused on Germany in the next few years the way that it is at present and in the coming weeks," Lammert said.

"That's why we have to lay emphasis on Germany presenting itself the way it is: open to the world, tolerant and naturally friendly to foreigners," he said.

Leaders Say Germany Open to the World, But Urge Caution

Days before the World Cup kicks off, leading politicians have underlined Germany's open and tolerant nature. But Chancellor Merkel has warned the country must remain vigilant to the threat of attacks against foreigners. (June 6, 2006)

In an interview with DW-TV, German Interior and Sports Minister Wolfgang Schäuble said that all measures had been taken to ensure that the biggest event in Germany's modern history will be safe. (June 3, 2006)

Germany is working hard to prevent the far right from hijacking the soccer World Cup and promote a positive image weeks before the event opens. Will ongoing controversy over racism get in the way? (May 23, 2006)