Germans Offer Theory on Whale Strandings | Germany| News and in-depth reporting from Berlin and beyond | DW | 16.05.2005

Surges of solar activity may cause whales to run aground, possibly by disrupting the creatures' internal compass, German scientists at the University of Kiel suggest. 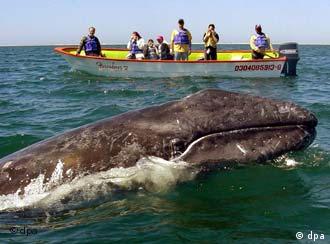 More whales are beached when the sun's activity is high

University of Kiel researchers Klaus Vaneslow and Klaus Ricklefs looked at sightings of sperm whales found beached in the North Sea between 1712 and 2003.

They then compared this record with another set of historical data -- astronomers' observations of sunspots, which is an indicator of solar radiation. More whale strandings occurred when the sun's activity is high, they found.

The sun experiences cycles of activity which range from eight to 17 years, with 11 years being the average. Short cycles are linked with periods of high energy output, while long cycles are believed to be low energy.

Changes in levels of solar radiation have a big effect on Earth's magnetic field. The most notable events are gouts of highly-charged particles, called solar flares, that cause shimmering lights, called aurorae, in the magnetic fields in polar regions.

The researchers found that of the 97 stranding events reported around the coastal countries of the North Sea over the 291 years, 90 percent occurred when the sun cycles was below average in duration.

The Vanselow team speculate that whales may have a magnetic sense of orientation like pigeons, which are believed to navigate thanks to small magnetic crystals on their beaks.

What could happen is that male sperm whales, following a migratory path from the Norwegian Sea, could become disorientated by minor changes in the geomagnetic field as they enter the North Sea, the pair suggest.

"In this shallow-shelf sea with a contourless seabed, often with soft bottom sediments, their deep-water sonar and other adaptations to their normal habitat may not function properly," they say.

Previous studies have suggested that powerful marine sonar could be to blame for whale strandings by messing up the whales' sense of direction and depth. 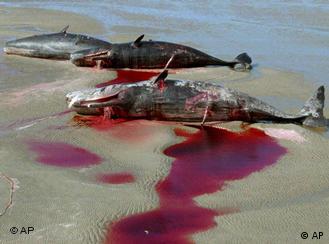 Dead sperm whales on the island of Romoe in the North Sea off western Denmark, Wednesday, March 27, 1996.

An October 2003 study by British and Spanish marine pathologists, based on autopsies carried out on 10 beaked whales that beached in the Canary Islands a few hours after a Spanish-led naval task force passed by, found that the cetaceans had suffered a mortal attack of the "bends."

Tissue dissection showed that the whales' livers and other internal organs were filled with gas bubbles, and smaller blood vessels had been literally blown apart from inside.

The injuries were consistent with decompression sickness, in which nitrogen gas, absorbed into the blood stream, expands quickly as a submerged mammal rises to the surface, forming bubbles that can clot or breach blood vessels.

The latest study is published in the Journal of Sea Research, published by the Netherlands-based Elsevier group.

Scientists will have to alter their theories about the Big Bang --German astronomers have discovered a cluster of galaxies that suggests the universe evolved into its present form far sooner than was thought. (March 4, 2005)

Unlike "green" biotechnology, the "white" variety is less well known -- and less controversial. It's regarded as a global growth market, and one in which German industry hopes to play a part. (Feb. 23, 2005)