Germans count Shakespeare as one of their own, says festival director | Culture | Arts, music and lifestyle reporting from Germany | DW | 21.07.2010

Germans count Shakespeare as one of their own, says festival director

German may be the language of Goethe but that's not holding Germans back from a love of Shakespeare, says Neuss Shakespeare Festival Director Rainer Wiertz. In translation, however, a lot more liberties are taken. 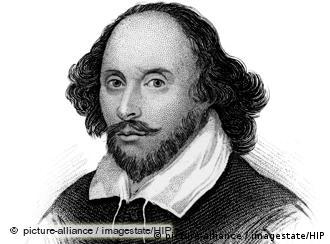 Almost 400 years after his death, the Bard's works remain a fixture on stages everywhere

The Neuss Shakespeare Festival takes place each summer in the small western German city of Neuss. It features productions from all over the world and also includes performances in the original English. This year, the festival celebrates its 20th anniversary, and director Rainer Wiertz spoke with Deutsche Welle about why German theater-goers can't get enough of the Bard.

Deutsche Welle: Twenty years on, what have been some of the major hurdles that you've had to overcome in order to make sure that this festival has continued to thrive?

Rainer Wiertz: I have to admit that there were no major hurdles, as you say, because this festival is so beloved by the audiences and the city of Neuss alike, that we didn't have really big problems. Another point is always the financial side of the thing. But as we don't have subsidies in this festival's budget - in every festival's budget we do not have any subsidies - that means we have to rely on the box office and on sponsorships and people contributing money to the festival. (…)

We can just rely on our fans - and they keep on coming. 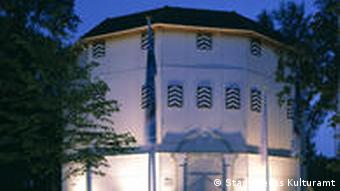 The Shakespeare Festival has centred around the Neuss Globe Theater

Does it surprise you that there is this very deep love and understanding of Shakespeare in many ways?

It should surprise one, but on the other hand, you know Shakespeare is so popular in Germany and has been so popular in Germany since 1800 when Schlegel and Tieck did their famous translations into German. Since then many, many Germans think he's a German author, you know? And he's the most-played author on German stages. In Germany we have Goethe, we have Schiller, we have plenty of other authors, but who is most played? It's Shakespeare.

So it's not that surprising that he is most popular. (…) What is so nice about it is that we also organize the plays in the original language. So that means people are curious to hear the play in that original Shakespearean language, and that's what makes the success of our theater.

It certainly does. Now, over 20 years, you must have experienced a number of the trends and the various ideas people have about performing Shakespeare in a certain way. What are some of the trends you've noticed along the way?

What we have nowadays is a much freer approach to the text, let's say, in continental Europe. Of course not in England, because they cannot. In England, you have the text and the only thing you can do with the text is to shorten it. In Germany, the text has to be translated first and the theaters nowadays tend to have their own translation, a new translation. 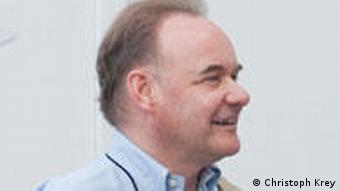 If you translate Shakespeare in a new, modern language, you have all sorts of things which wouldn't occur in Elizabethan language. So that provokes, of course, if you have that contemporary language; it provokes to do modern-times productions, and these productions are very, very different from the production, for instance, from the Globe Touring Company [from London], and which is not only - as we say in Germany - close to the text, it is the text. Nothing else.

Twenty years is a long time, but you must be able to tell me some of the highlights of those 20 years, some of the things that remain in your mind and in your heart as a great Shakespeare-lover?

I remember when Edward Hall came with the [all male] Propeller Company from Newbury for the first time, and they came with "Henry the Fifth" and played outside the Globe. A third of the play was played outside, everything that happened in England. Then they went to France, and the outside of the Neuss Globe was transformed into the ramparts of the Harfleur. And once the Lord Mayor of Harfleur was killed and Harfleur was conquered, everybody moved inside the Globe. And then (...) when they came back to England and Catherine has to learn English, and she does the thing, the arm, the finger, the nail, these things - you remember that - that was all outside, and she was sitting in the bathtub outside the Globe.

This was one of those companies who would really try to play the Globe, to play with the whole site. 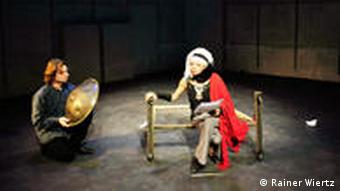 On the 2010 festival lineup is "Warum, warum" by veteran director Peter Brook

What's going to be important for the Neuss Shakespeare Festival to continue to thrive? What do you think is going to make the festival the success that it is today?

You must not have any standstills. You must really move forward, you must improve the environment here of the Globe Theater. You must always feel the audiences coming here, welcome them immediately when they arrive here; they must like the site. You have to have good wine. (…) All these kind of things make the festival what the festival is.

Do you think Shakespeare will remain relevant to 21st-century audiences?

You know, an author who was relevant for more than 400 years will do it for 500 years, I'm quite sure.

The Neuss Shakespeare Festival runs through August 14. Click on the link to the festival's homepage below for more information.

The reconstruction of an Elizabethan theater dating from the 17th century in the Baltic port of Gdansk, Poland, is underway. The new theater is to serve as a venue for an annual festival devoted to Shakespeare. (29.04.2010)

"King Lear" is William Shakespeare's darkest tragedy - in it, everything crumbles to pieces. German theaters have now revived the work. Could it be a response to the shaky situation around the world? (20.10.2009)