Germany is one of the largest book markets in the world, though it's been shrinking slightly in recent years. However, more readers of both e-books and paper books bought online last year. 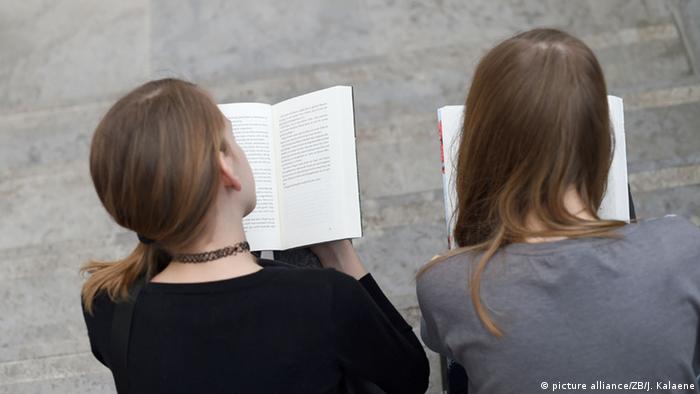 Online books sales in Germany rose by 6.6 percent in 2015, reported the Börsenverein des Deutschen Buchhandels, Germany's book trade association, on Tuesday (07.06.2016) in Frankfurt. That represented online revenues of 1.6 billion euros - and marked a comeback after internet-based sales had fallen in 2013 and 2014.

An estimated three-quarters of online book sales - including both e-books and traditional volumes - can be attributed to the US giant Amazon. The rest distributed among smaller dealers including bookshops that maintain both physical locations and online portals. About one in six books sold in Germany is bought online.

"With a nearly completely implemented multi-distribution-channel strategy among booksellers and an active culture of innovation among publishers, the sector has made a huge step forward," booksellers' association chair Heinrich Riethmüller told reporters Tuesday.

Non-fiction up and overall sales drop

Overall book sales, however, shrunk by 1.6 percent to total 9.2 billion euros, with revenues in physical bookstores dropping by 3.4 percent. And, as Riethmüller pointed out, "the average bookshop price has been dropping over the past two years, coming in at 14.59 euros in 2015." That's equivalent to $16.56.

In addition to more online sales in 2015, another trend was a greater interest in non-fiction books, which saw a revenue jump of 1.6 percent, after already rising 5.4 percent in 2014. Among the top non-fiction titles was Giulia Enders' 2014 health book, "Gut: The Inside Story of Our Body's Most Underrated Organ."

Despite ups and downs, the book industry has undergone an "exemplary" transformation in the past decade and remained largely stable, said Börsenverein director Alexander Skipis.

Harry Potter takes to the stage in London

Five years after the last film, Harry Potter is back - and he's now a father and civil servant in the Ministry of Magic. Preview performances of the next chapter of the successful series begin in London on June 7. (07.06.2016)

Right-wing publisher Schelm intends to release a version of Adolf Hitler's anti-Semitic manifesto "Mein Kampf" without annotations. Many are outraged - though some believe it's time Germany dealt with its Nazi past. (06.06.2016)