A German zoo triggered a widespread search operation after wrongly reporting the escape of several dangerous animals. Of the two lions, two tigers, a bear and a jaguar reported gone, only the bear actually left its cage. 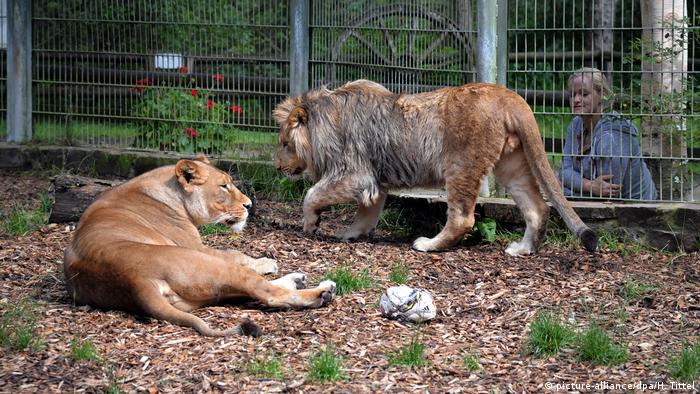 Several animals reported to have escaped a zoo in western Germany never left their enclosures, a local mayor said on Friday.

A local official near Lünebach in the German state of Rhineland-Palatinate had reported earlier that two lions, two tigers, a bear and a jaguar had escaped Eifel Zoo following a severe thunderstorm and flooding in the early hours of Friday morning.

But the mayor of Arzfeld, Andreas Kruppert, told reporters that the lions, tigers and jaguar had in fact never left their enclosures. Officials had lost track of them during the storm, he added, but later found them with the help of aerial drones after the water had receded.

The only animal to actually escape was the bear, which was able to leave after flooding broke down the fence around its enclosure. Officials later shot the bear after finding him on one of the zoo's public paths.

"We're very happy that the scenario we had initially feared didn't turn out to be the case," Kruppert said.

Authorities had told local residents to stay indoors, while firefighters, police and hunters scoured the local area for the animals.

The privately owned Eifel zoo, located about 15 kilometers (9 miles) from the Belgian border, owns hundreds of animal species and spans an area of around 30 hectares (74 acres).

Kruppert said the zoo was checking whether the animals could remain in their enclosures. The zoo would, he added, take the animals to another zoo if the water damage was too great. The bear escaped after flooding broke open its enclosure

A 'hybrid' polar-brown bear has been shot dead at the Osnabrück Zoo in Germany, reportedly after breaking out of its enclosure. Some visitors were ushered to safety inside a monkey house. (11.03.2017)

Uncaged! When animals escape their zoos

Animal rights groups are calling for an indepenent investigation after silverback gorilla Kumbuka escaped his enclosure and was subdued by a tranquilizer dart. Click for more on Kumbuka, and other noteworthy "zoobreaks." (14.10.2016)