Walter Jens, a noted German author and literary historian who campaigned for tolerant debate in post-war Germany, has died. The 90-year-old once headed the German arm of the PEN organization and Berlin's Academy of Arts. 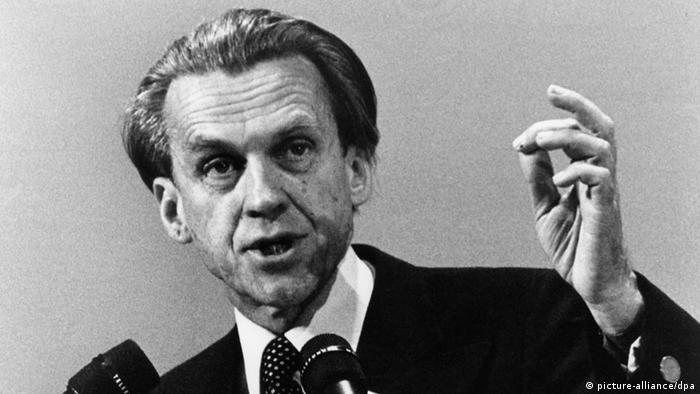 Former rhetoric professor Walter Jens, who was once described as a "moral yardstick" in Germany has died in southern city of Tübingen at the age of 90.

The vocal academic, who sought answers to questions of the modern age through his study of ancient literature, belonged in the early post-war years to Germany's legendary "Group of 47" literature circle.

In 2003, Jens reacted to a disclosure that as a young man he had been recorded as being a Nazi party member by saying the 1942 listing was made without his knowledge.

From 2004, Jens withdrew gradually from public life, suffering from dementia that left him increasingly mute and incapable of writing. He made media appearances in the care of his wife Inge, who publicized the plight of families with dementia in an ageing Germany.

His death on Sunday was announced on Monday by his son Tilman from Jens' home city in southern Germany, Tubingen, where he had long held a university professorial chair in rhetoric.

Reacting to the news, the Berlin-based Academy of Arts - one of the oldest cultural institutions in Europe - described Jens as a cultural politician who himself had written history through his endeavors.

Chancellor Angela Merkel's spokesman Steffen Seibert said Jens had been one of Germany's "most significant intellectuals" who had played an important cultural, political role in public discussion.

"Over decades, his voice was trend-setting in the great intellectual debates, also in the great political debates of our country," Seibert said.

Jens, a professed Protestant Christian, pacifist and soccer fan, who in his youth played as goalie, was born in Hamburg in 1923 and went on to write numerous novels, essays, stage works and radio dramas.

Post-war, he campaigned against re-armament in the new Federal Republic of Germany. During the Cold War years of the 1980s, he took part in a sit-in blockade outside a US depot for Pershing missiles at Mutlangen in southern Germany.

He also opposed the US military invasion of Iraq in 1990, offering refuge in his home to US military deserters that year.

Jens' motto was that intellectuals should get involved in public debate and sound caution in the tradition of enlightenment.

On Monday, Berlin mayor Klaus Wowereit of the Social Democrats (SPD) said Jens deserved special credit for unifying the academy - based in the-then West Berlin - with its counterpart in former communist East Berlin.

Five years ago, at his 85th birthday celebrations, Germany's States Minister for Culture and Media, Bernd Neumann, described Jens as a "moral yardstick" and a committed democrat.