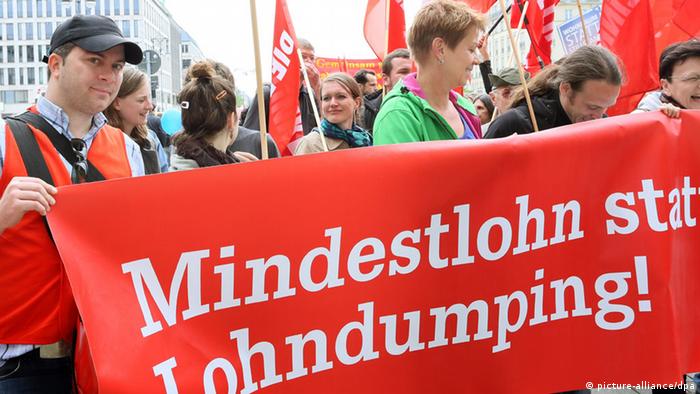 The minimum - known in German as 'Mindestlohn' and to be phased in over the next two years - was one of the key policy planks of the coalition which Merkel's conservatives formed with the union-allied Social Democrats (SPD) in January.

Speaking at a May Day rally in Bremen, Sommer said "no hour should be cheaper than 8.50 euros," adding that the unions saw that wage minimum's introduction as a "test" on whether Merkel's government was "really serious" about social justice.

No-one wage recipient should be left worse off due to age, gender, social origin or societal situation, said Sommer, who retires shortly after 12 years as DGB head.

His intended successor Reiner Hoffmann, speaking in the Ruhr District industrial city of Duisburg, warned the government against plans to pay less to job seekers aged under 18 and long-term unemployed workers.

Germany's BDA employers' federation - in a statement issued on the eve of May Day - said 'differentiations' were needed in statutory minimum wage legislation to assist the "weakest" in the labor market. Flexible forms of employment such as short-term contracts, job temping and so-called 'mini-jobs' must be retained, the BDA added.

Referring to the upcoming European Parliament election on May 25, a senior IG Metall trade union member, Irene Schulz, condemned austerity policies imposed in crisis nations across southern Europe - such as Spain and Greece.

The DGB estimated that more than 400,000 people turned out to nearly 500 events organized by its affiliates across Germany.

The needs of people and not market economics must be at the core of policy-making, said Cornelia Coenen-Marx, who is the church's labor expert.

In Athens, an estimated 15,000 people attended May Day rallies organized by the Greek unions ADEDY and GSEE which propagated the motto "work for all."

Greece, under austerity policies enacted by the coalition government of Prime Minister Antonis Samaras, has high unemployment, put officially at 27 percent of the available workforce.

Moscow's May Day rally on Thursday amounted to a significant first since the 1991 breakup of the Soviet Union as some 100,000 workers paraded across the iconic Red Square.

President Vladimir Putin, who met trade union leaders later at the Kremlin, said workers needed to increase productivity and added that a plan to raise wages was putting a strain on budgets.

The business daily Vedomosti said Putin's government was running major risks by harking back to the Soviet era in appeals to the Russian public.

"The late USSR is a period which directly led to the collapse of the economy and state system of the entire Soviet country," the paper said.

In Russia's Pacific port city of Vladivostok 40,000 workers displayed banners, including one that said: "Give us wages, we are not slaves."

With much of the world on holiday for May Day, the few financial markets that remained open Thursday delivered fairly lackluster indices.

In the US, Wall Street was open but trading was subdued, with the Dow Jones industrial average down 0.1 percent at 16,566 - ahead of key US jobs data due out on Friday.

Nearly half the Greek workforce is unemployed or unpaid. Nikos Aivatzidis and Alexandra Tsitoura work at a firm that hasn't paid them in years. How do families like theirs survive in the EU's most depressed economy? (09.04.2014)

Is Portugal the new 'India of Europe?'

Portugal is one of the eurozone's poorest countries. But there's one bright spot: the outsourcing industry. Multinational companies are increasingly turning to Portugal as a base. (18.03.2014)