German taxpayers may lose out over Airbus A380 loan

Some €600 million in German taxpayers' money could be at risk after Airbus stops production of its superjumbo, a report says. The government is said to be looking at possible restitution claims. 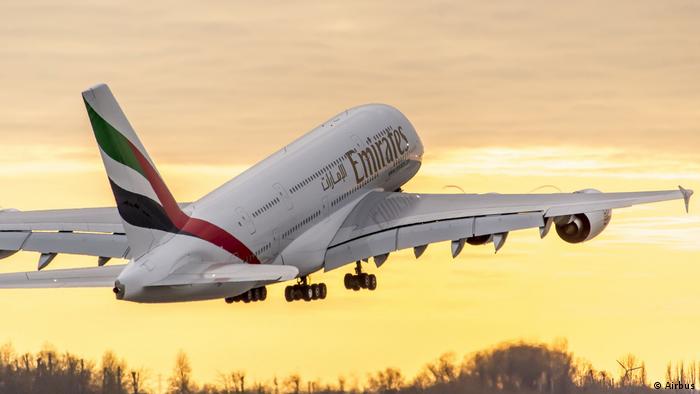 European aerospace corporation Airbus has repaid only a third of a €942-million ($1.07-billion) loan received from Germany for developing its A380 superjumbo.

This means some €600 million of taxpayers' money might go up in smoke now production of the A380 is to cease, newspapers reported on Monday.

A spokeswoman from the Economy Ministry cited by newspapers of the Funke media group said that the consequences of Airbus' decision were being analyzed and discussed with the corporation. She said no information could be given about any claims for restitution at this stage.

Up to now, repayments of the loan for the A380 have been coupled with deliveries of the aircraft, so that lenders received a certain sum for each plane handed over to a customer.

However, because Airbus intends to build and deliver only 17 more A380s up to 2021 before stopping production, it is unclear how and if it will make repayments and to what extent it has to.

The Franco-German aviation giant announced almost three weeks ago that it would be ending production of the plane because it was struggling to sell it.

Germany, France and Spain were the main financial backers of the A380 project.

Some 3,500 jobs in France and Germany could be at risk when A380 production stops.