German Student Finds Valuable Artwork in Skanky Sofa | News and current affairs from Germany and around the world | DW | 31.10.2007

A German student got a very nice surprise when the flea market couch she bought in Berlin opened up to reveal a valuable secret. 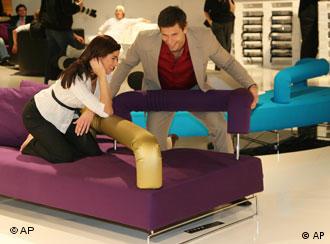 "Okay, it's nice and modern, but where's the hidden valuable painting?"

If you have ever considered buying a couch from a flea market and thought twice about it as your mind raced with images of what might have taken place on it and what may lurk beneath it, it may be time to reassess your attitude to second-hand furniture.

One Berlin student, obviously not one to be in the luxurious position to pass up a bargain, definitely got more than she bargained for when she picked up a pull-out sofa at one of the German capital's flea markets.

Rather than finding something disgusting which had been discarded sometime during its history -- or worse, something living there -- the student found a 26-centimeter-by-39-centimeter (10.2-inches-by-15.35-inches) oil-on-shale painting which, to her immense shock, turned out to be worth several times the 150 euros ($215) she had paid for the sofa. 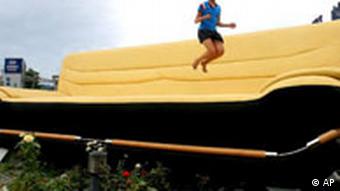 Just imagine what delights might be lurking under this one

The piece of art, apparently titled "Preparation to escape to Egypt" was painted by an unknown artist close to Venetian painter Carlo Saraceni between 1605 and 1620.

The small painting was sold for 19,200 euros ($27,630) at a Hamburg art auction over the weekend, according to auctioneers Kunst Kettler.

Anyone wanting to get rid of that old soiled three-piece lounge set that your children were conceived on, now is the time.

Germans may have a reputation for being a little glum, but they're not all sourpusses. They can laugh or be laughable at times, and you can chuckle right along. Read up on the farcical side of Germany. (26.10.2007)

A German Halloween reveler dressed as a blood-splattered zombie caused more than his fair share of frights when panicked passengers on a train mistook him for a murder victim and called the police. (29.10.2007)

Real Life Prison Break is an Open and Shut (Suit)Case

Two German teenage delinquents are on the run after a daring escape from a correctional facility which would have TV screenwriters going green with envy. (30.10.2007)

Have you ever found anything valuable in a second-hand piece of furniture? Please include your full name and country with any reply.