The German minister of state for Europe has said that the country would willingly receive asylum requests. Germany is "open to all those politically persecuted as a matter of principle," he has told German media. 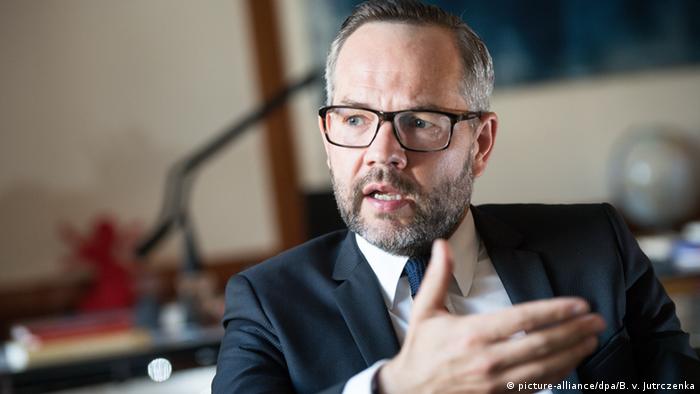 German Minister of State for Europe Michael Roth said that "the Foreign Office stands in solidarity with all critical intellectuals in Turkey," according to reports on Wednesday.

While the relevant government authorities are tasked with processing asylum requests, the Social Democratic Party (SPD) member stressed in an interview with German newspaper Die Welt that the government would willingly receive applications.

Jean Asselborn has said that sanctions against Turkey may be in the cards if Ankara's purge of civil servants continues. He compared the government's strategy to Nazi Germany. (07.11.2016)

Turkey's president has accused Germany of becoming the "backyard" of Gulenists, who are blamed for an failed coup attempt in Turkey. Ankara has requested the extradition of a number of alleged Gulen members from Germany. (03.11.2016)

"Germany is an outward-looking country and is open to all those who are politically persecuted as a matter of principle," Roth said. "They can apply for asylum in Germany. That applies not just to journalists."

"What is happening in Turkey goes against our understanding of European values, rule of law, democracy and media freedom," Roth said. "That is why our response to the Turkish government is crystal clear: Not this way!"

Roth also hinted that the European Union's report concerning Turkey's ascension to the bloc, due to be published Wednesday, would bear a negative conclusion. "The EU Commission is becoming very discerning and critical about what is working badly – or not at all – in Turkey," the SPD politician said. "Unfortunately, that currently encompasses many things."

However, Roth warned against ending membership negotiations. "Such a step would isolate a currently westward-oriented Turkey."

The statement was published the same day the EU's foreign policy chief Federica Mogherini urged Ankara to resume political dialogue with the opposition, as the state continues to jail rival political figures and critical news outlets.

"The EU and its member states ... call on Turkey to safeguard its parliamentary democracy, including the respect for human rights, the rule of law, fundamental freedoms and the right of everyone to a fair trial, also in conformity with its commitments as a candidate country (for EU membership)," Mogherini's statement said. "A return to a credible political process and to a genuine
political dialogue is essential for the country's democracy and stability in the region."

Since the failed coup attempt against Erdogan in July, the Turkish government has launched a crackdown on large sections of the population, including academics, media, the army and judiciary. Some 35,000 people have been detained, while over 100,000 have been dismissed from official positions.

On Monday, Luxembourg's foreign minister, Jean Asselborn, said that the Turkish authorities' purging of officials and critics was reminiscent of Nazi Germany.

"To put it bluntly, these are methods that were used during the Nazi era and that's a really, really bad development... that the European Union simply cannot accept," Asselborn said on Monday.

However, Germany has made it clear that it was not participating in any such discussions and that sanctions against an important trading partner would not be on the table. "What we need is a clear and unified European position on the developments in Turkey," Angela Merkel's spokesman Steffen Seibert said on Monday. "We have to make it clear to Turkey what impact the repression of the press and the repression of the opposition will have on its relations with the European Union. That's why it's important to keep the channels of communication open."

However, Ankara has been increasingly vocal in its criticisms towards Germany.  On Tuesday, Turkey's Foreign Minister Mevlut Cavusoglu accused Germany of being a leading supporter of militant opposition groups, such as the Kurdish PKK and far-leftist DHKP-C, both of which have carried out attacks in Turkey.

"Germany thinks that they are a first class country, a first class democracy, and that Turkey is second class," Cavusoglu said. "We want them to treat us as equal partners."