The Max Planck Institute for Astrophysics in Heidelberg said that scientists had discovered a massive gas giant that is believed to be the youngest planet outside the solar system. 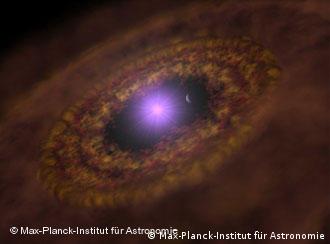 The young planet is called TW Hydrae b and "is still linked to the dusty disk surrounding its parent star," the Max Planck Institute told DPA news agency just before of publication of the discovery in the British science journal Nature.

Scientists say the giant planet has a mass 10 times greater than that of Jupiter, the largest planet in the solar system. It orbits its mother star every 3.65 days. 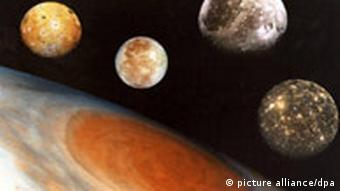 Jupiter and its four large moons

Planets are said to take shape within disks of dust and gas surrounding newly born stars. By researching planets, scientists can glean information about how their planetary systems were formed.

The young planet orbiting the young star provides observational evidence to the long-held theory that planets form within the first 10 million years of a parent star's life, according to the study. Until the recent finding, all of the 250-plus planets discovered outside our solar system have been found around stars 100 million years of age or more.

The research team, led by Johny Setiawan, estimated that the mother star is between 8 million and 10 million years old, which makes the newborn extrasolar planet even younger. The planet is still linked to the dusty disk of dust and gas, the raw materials which make a solar system.

These so-called protoplanetary disks have lived up to their name, Setiawan said.

Europe plans to broaden its involvement in the International Space Station with the upcoming mission of the US space shuttle Atlantis, which is scheduled for takeoff on Thursday, Dec. 6. (04.12.2007)

What do you think of the new discovery? Please include your name and country in your reply.