Back at home, Cologne-based reggae musician Gentleman is a household name, and his songs are even played in Jamaica. Now he's touring in Africa and running into some musical surprises along the way. 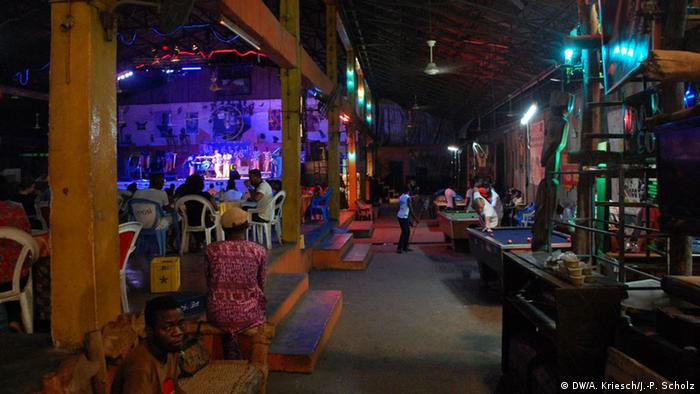 "Unbelievable" - Gentleman says the word over and over again while working through a mountain of old records. "This is the world’s best record store!" he says. 'Unbelievable' because the shop, Jazzhole, isn't located in London or New York - but in the chaotic Nigerian port city of Lagos. 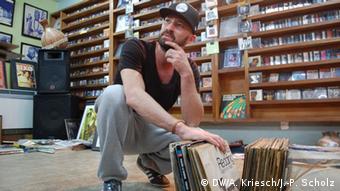 Gentleman's favorite record shop: the Jazzhole has been in the Lagos city center for nearly 25 years

The stops on Gentleman's African tour are in South Africa, the Ivory Coast, Ethiopia - and Nigeria. Gentleman's second visit to the pulsating city of millions is at the invitation of Germany's cultural Goethe Institute. In the record store, Gentleman meet up with German-Nigerian musician Adé Bantu. As kids, the two once rode skateboards in Cologne. Adé Bantu lives in Lagos now.

"A lot has happened in the Nigerian music scene in the past few years," Bantu tells his childhood friend. "You feel a new sense of confidence in the air." Songs from Nigeria are played everywhere in Africa, and pop musician D'Banj has also found success in Europe with songs like "Oliver Twist."

"I get the impression that there's a lot of material bubbling up and that there's an incredible music culture here," says Gentleman, whose real name is Tilmann Otto. The son of a minister has traveled regularly to Jamaica since childhood. Now 38, he's been performing reggae for two decades. "Superior" was a hit song in 2004, and the album "Diversity" climbed to Number One on the German charts in 2010. Sharing with others artists has always been important to Gentleman - including while on tour in Africa.

"Jamaica is the mother land of reggae, but many of its elements originate in Africa - and you get that impression clearly here," says Gentleman, while driving to a pre-concert sound check. Seated on his left is his wife Tamika, who accompanies him as a background singer. On his right, Lagos flashes by in the car window: SUV's gleaming in the sunlight, huge building cranes, eight-lane bridges - then overfilled small busses, bumpy sandy stretches, dilapidated corrugated iron huts.

The destination is the legendary New Afrika Shrine, where Gentleman's performance was scheduled. Considered the heart of the Afrobeat genre, it's a venue with history. 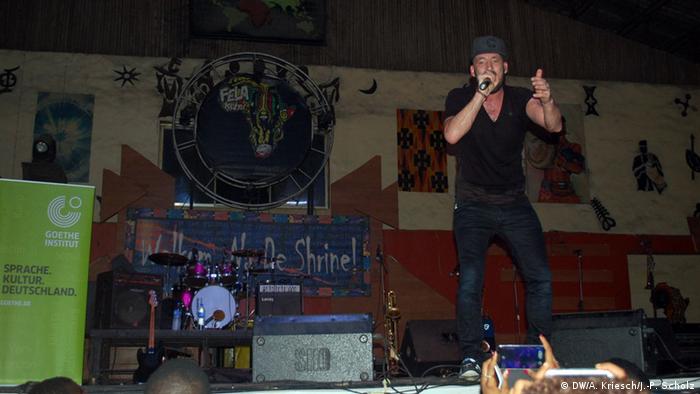 Gentleman, on stage in the New Afrika Shrine

Fela Kuti is credited as originator of the musical style that combines traditional Yoruba sounds - the music of the largest ethnic community in Lagos - with funk, jazz and other elements.

His son Femi has picked up with his father's legacy at the New Afrika Shrine. This evening, Femi Kuti wants to share the stage with Gentleman. It's a bold experiment. Afrobeat and reggae may share African roots, but they remain very different.

"Afrobeat is much more complex. Reggae more monotonous and with a different groove," Gentleman explains before the concert.

A force for change

Differences notwithstanding, the fans and the two artists enjoy the performance in the filled concert hall, even though the sound engineer they've brought along from Germany sadly shakes his head over the venue's acoustics. But that's only secondary this evening. After all, Femi Kuti and Gentleman have something in common: "Many reggae musicians seek to convey a message in their texts," says Femi Kuti. "That’s exactly what we try to do with Afrobeat too." 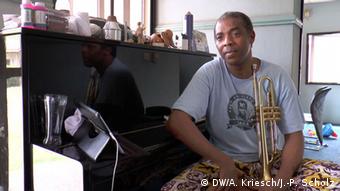 Afrobeat star Femi Kuti is continuing in his father's footsteps

Femi Kuti's songs often contain social criticism - pointing the finger, for example, at the frequent instances of corruption in Nigeria. In the 1970s, the country's military government sent Femi’s father Fela Kuti to jail for his critical lyrics, and the artist even had to leave the country. "It’s simple," Gentleman sums up: "Reggae and Afrobeat are genres for oppressed people. Radical, but sweet. Timeless, yet traditional."

It's no surprise, then, that the reggae musician from Cologne snatches up another half-dozen Afrobeat records in his favorite record store before catching his flight.

In our first podcast, hosts Laila Johnson Salami and Cai Nebe profile two leaders who were a thorn in the side of imperial powers. And both have a surprising role in the foundations of Rastafarianism, and reggae music.

In our biweekly podcast we meet the history-making men and women who shaped the African continent. With historical anecdotes and expert voices, the podcast finds out why our African Roots run deep.