The government in Namibia has welcomed the move but Herero and Nama activists have slammed Germany's pledge to fund projects in the country rather than provide reparations. 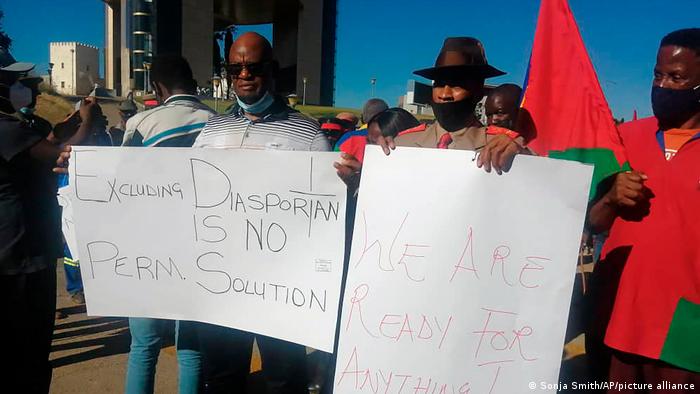 A landmark accord on German colonial-era crimes in present-day Namibia was greeted with praise, but also heavy criticism and protests in both countries on Friday.

Germany finally recognized the massacre of thousands of people as "genocide." It promised to pay €1.1 billion ($1.3 billion) over 30 years for reconstruction and development projects in the African country, but stopped short of formal reparations.

"We will now officially refer to these events as what they are from today's perspective: genocide," said Foreign Minister Heiko Maas.

What was the reaction in Namibia?

While Namibian government supports the deal, many representatives of the Herero and Nama communities slammed it as insufficient.

"Genocide is a crime, and so that crime is already regulated by international law. The penalty for it is reparations," said Nandi Mazengo of the Herero Genocide Foundation.

While Herero and Nama communities are split in factions and have no overarching ethnic leadership, several ethnic leaders joined a protest in Namibia's capital, Windhoek, on Friday.

Germany's President Frank-Walter Steinmeier is expected to soon visit the city and make an apology speech. However, Mutjinde Katjiua, Secretary-General of the Ovaherero Traditional Authority told journalists that Steinmeier was not welcome.

"We advised the (German) ambassador that the president should stay in Germany. We will do anything in our effort to make his coming or his state unattainable," he told reporters. "We will not accept any outcome between these two governments."

Herero chief Vekuii Rukoro described the accord as "an insult."

"That's a black cat in the bag instead of reparations for a crime against humanity," he told the Reuters news agency.

Many representatives of Herero and Nama have also criticized Germany for excluding them from the talks and negotiating only with Namibia's central government. The nation's politics is dominated by the Ovambo ethnic group.

What is Germany's stance?

Responding to this criticism, Germany's chief negotiator Ruprecht Polenz told DW that his counterpart in the talks, Dr Zed Ngavirue, is a Herero.

"And in his delegation, there were Herero and Nama people present and in preparation of the Namibian position," Polenz added.

He also told DW that "all Namibians are represented by the government."

When asked about reparations, Polenz said that the talks focused on "political and moral obligations."

"And this is a different and therefore we are not speaking about in legal terms about reparations," he added.

The Herero and Nama should still have had a "greater voice" in negotiations, according to political scientist Joshua Kwesi Aikins.

"The borders of modern-day Namibia were basically drafted here in Berlin in the infamous Africa Conference of 1884-85," he told DW. "So to now limit negotiations to the Namibian government and a few select individuals is not good enough."

What do German activists say?

Activists in Germany also criticized the deal. The Society for Threatened Peoples greeted Berlin's recognition of genocide, but said the accord should be "a new beginning for processing Germany's colonial history, not its end."

They urged Germany to reach out to Herero and Nama associations who believe to have been excluded from the talks.

He said Germany only committed to a "small developmental aid program, that has nothing to do with reparations."

The Berlin Postkolonial group slammed the deal as "doomed to fail" and "not worth the paper it was written on."

They said Germany still did not admit to genocide in the context of international law, and was framing its payment to Namibia as "voluntary aid." The group was set to stage a protest against the deal on Friday.

Germany is going to apologize for the genocide against the Herero and Nama in Namibia. But reconciliation cannot be taken for granted — now the hard work begins, writes DW's Daniel Pelz.