The German engine drivers' union GDL has defended its weeklong strike, refusing to come to the negotiating table. Ministers have criticized the strike, which will inconvenience millions of commuters across Germany. 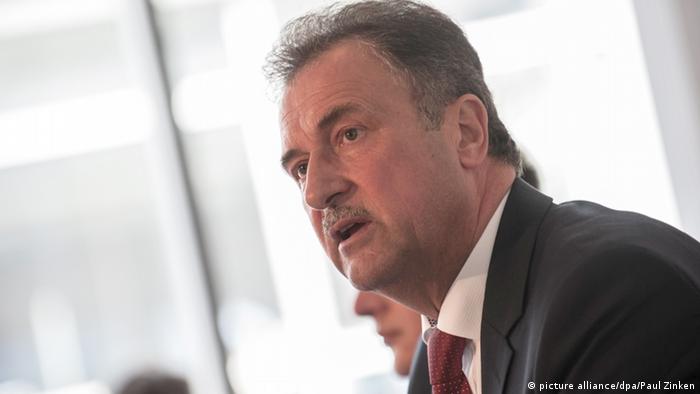 GDL leader Claus Weselsky (pictured above) said Monday that his union of engine drivers with German rail operator Deutsche Bahn (DB) would go ahead with its nearly weeklong strike - its longest until now - and not negotiate unless results were guaranteed.

Striking GDL members were to stop running freight trains beginning at 3 p.m. (1300 UTC) on Monday. Passenger trains would be affected beginning at 2 a.m. on Tuesday and lasting until 9 a.m. Sunday.

Speaking to journalists at a news conference in Berlin, Weselsky said "Deutsche Bahn was responsible for the escalation" of the strike, because its management had been involved in discussions for months without aiming for a solution.

GDL and DB have been discussing engine drivers' working hours and salaries for several months. The union has sought a 5-percent wage increase and a reduction in working hours from 39 to 37.

The key point of contention, however, is that GDL wants the right to independently represent around 17,000 train workers in other positions, such as stewards, in collective bargaining procedures. GDL is actually the smaller of Germany's two rail unions, the other being EVG.

Deutsche Bahn "does not know where it stands," the union chief said, adding that the German rail company had taken "one step forward and two steps backward" when it rejected an agreement with GDL in February this year. The union had wasted four months, Weselsky said, referring to the engine drivers' demands as "basic rights." 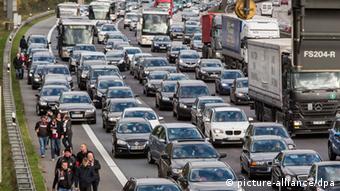 Cars often clog the German Autobahn during a railway strike. Most commuters have no option but to take the car to work.

This is GDL's eighth strike since January. The last one in April cost the German economy up to 100 million euros ($111 million) a day and inconvenienced 5.5 million passengers across Germany, the German industry federation BDI said.

"Weselsky cannot determine, when and if at all, passengers are able to travel on the train," the German railway customers union said in its statement criticizing the strike.

"Travelers and commuters, the Deutsche Bahn and the German economy will be heavily affected," Deputy Chancellor and Minister for Economic Affairs Sigmar Gabriel said of the union's decision to halt work. It was "difficult for outsiders to understand the conflict with salary negotiations," he added.

German transport minister Alexander Dobrindt also said he understood that many citizens were annoyed at the dimension of the strike.

"The manner of GDL, especially that of its leader is often very clumsy," Greens chief Anton Hofreiter told state broadcaster NDR on Monday, denouncing Weselsky's position and demanding that the government revoke a proposal for a law on railway salaries, which would improve the chances of the GDL coming to an agreement with the German railway company.

German commuters face a second day of rail disruptions. Early Wednesday, 3,000 train drivers walked off the job to back their claims for higher pay and negotiating rights. (23.04.2015)

To help people deal with record inflation, this summer Germany offered a sharply discounted fare for local and regional public transit. Was the project a success? It depends on what you wanted out of it.

Germany's rail operator and a train drivers union have agreed on a new pay deal. The dispute had earlier seen three rounds of strikes.