In another damaging blow to the credibility of German rail operator Deutsche Bahn, the company has admitted that it had secretly and illegally monitored the health records of some of its employees. 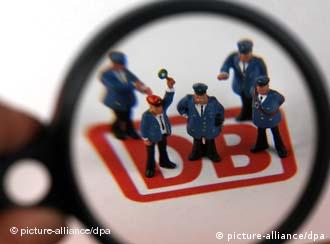 Under scrutiny: DB employees have been spied on again

Deutsche Bahn, still reeling from a spy scandal earlier this year, released a statement on Tuesday saying: "The Deutsche Bahn management has received indications that the group's security division collected employees' illness-related information and circulated it within the group. As the data were not job-specific, they should not have been collected."

Earlier this year, Deutsche Bahn confirmed it had scoured the personal data of 173,000 workers, around three-fourths of its workforce, for signs of dubious relations with suppliers.

Bahn defends spying only in cases of illegal activity 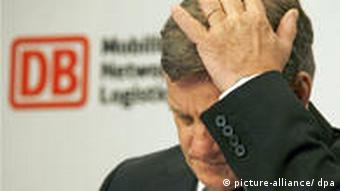 Deutsche Bahn employees' computer files were scrutinized "only in those cases, in which there was a concrete suspicion of internal company data being illegally passed on," the company said in a statement in April.

The announcement came in response to a report by the German weekly Der Spiegel, which claimed that Deutsche Bahn had not only - as previously assumed - monitored hundreds of thousands of employees' e-mails, but also secretly searched their computer hard drives.

The existing spying quagmire was rendered even more treacherous by additional media reports linking the company's monitoring activity to a German parliamentarian.

According to the Berliner Tagesspiegel newspaper, transportation expert and Social Democrat Uwe Beckmeyer was on a blacklist of 30 Deutsche Bahn critics whose e-mail correspondence with company employees had been screened since 2005.

The company, however, adamantly rejected this specific allegation.

The resulting outcry eventually led to the resignation of the firm's chief executive Hartmut Mehdorn.

Hartmut Mehdorn's days as the boss of German rail operator Deutsche Bahn look to have come to an end as the embattled executive offers his resignation amid a damaging, ongoing data privacy scandal. (30.03.2009)

The surveillance scandal surrounding Germany's Deutsche Bahn rail company keeps on growing. A new report says the firm repeatedly spied on nearly all its employees over the course of eight years. (10.02.2009)