German Radical Christians Look to US | Germany| News and in-depth reporting from Berlin and beyond | DW | 11.11.2004

While fundamentalist Christians played a vital role in the re-election of US President George W. Bush, their German counterparts have so far failed to gain any political significance. Some experts say that could change. 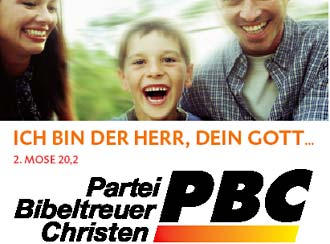 "I am the Lord, thy God," reads the election campaign poster

"I pray every day, I read the Bible every morning … My faith gives me focus and perspective."

It's questionable whether a candidate for the German chancellorship would be able to run a successful campaign with such statements -- even if he or she belonged to a party that carries the Christian "C" in its name, such as the country's largest opposition party, the Christian Democratic Union and her Bavarian sister, the Christian Social Union. 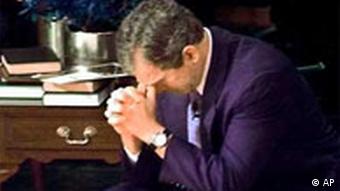 Then Texas Gov. George W. Bush bows his head in prayer before speaking during a service at the Second Baptist Church in Houston in 1999.

US President George W. Bush, on the other hand, managed to win re-election partly because he said exactly that. Without massive support from the religious right he would not have beaten John Kerry. About three-quarters of conservative Christians voted Republican.

In Germany, radical Christians have so far played a negligible role in the political process and it remains unclear whether that will change in the future.

The Partei Bibeltreuer Christen (PBC), or Party of Christians True to the Bible, could be seen as the closest German equivalent to politically active and Bush-supporting US Christians. The tiny party mainly attracts attention because of its idiosyncratic TV spots and its lack of supporters. 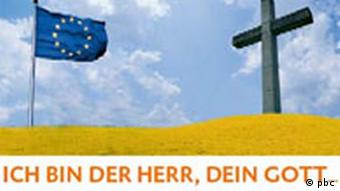 In elections for European Parliament in June, the most recent nation-wide elections, the political mouthpiece of radical Christians got 0.38 percent of the vote. Subtracting the odd joke voter here and there, the number of PBC followers can be called minute so far. During the 2002 general elections, the party failed to even reach the 0.1 percent mark, with only about 15,000 people giving PBC their vote.

PBC leader Gerhard Heinzmann, who has no problem being labelled a Christian fundamentalist, said he was pleased with Bush's re-election.

"There's an extraordinary agreement on issues between our supporters and Bush voters," Heinzmann said, citing opposition to gay marriage and abortion as examples. Both groups "not only elect their government, but also pray for its members," he said. And that's what counts, he added.

The PBC's 5,000 registered members would like to profit from their politically successful US brothers and sisters in faith: According to experts, 20 to 30 percent of Americans can be described as fundamental Christians. But Heinzmann said he didn't expect this to happen.

"German Christians believe that they don't have a role to play in politics and unfortunately that's not going to change," he said. 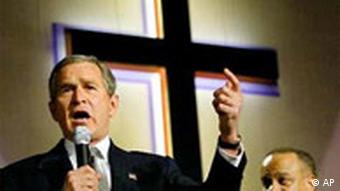 President Bush speaks during a tribute to the life and legacy of slain civil rights leader Martin Luther King Jr. at a Baptist church in 2003.

Bush himself is a member of the United Methodist Church, which is represented in Germany as the Evangelisch-Methodistische Kirche (EmK), or Evangelical Methodist Church. In the US, Methodists have repeatedly signalled their political independence by pointing out areas in which they disagree with the Bush administration. Issues such as the death penalty and the war in Iraq led Bush's church on a collision course with the president.

Walter Klaiber, who currently heads the EmK as bishop, said he saw a need for the church to be politically active, but added that such involvement should be limited to issues and should not include support for individual politicians. The EmK's US counterpart seems to follow the same policy and did not endorse Bush -- unlike many other radical religious splinter groups.

Experts differ on the number of supporters of small Christian congregations that aim to establish radical Christendom in Germany. 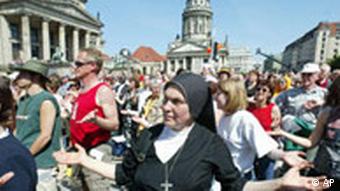 While hundreds of thousands of German Christians gathered in Berlin for an ecumenical convention in 2003, church pews remain empty most Sundays.

Rüdiger Hauth, who monitors religious sects for the Evangelical Church, Germany's largest Protestant church, in the western German region of Westphalia, said there are ten thousands of supporters. But Richard Ziegert, Hauth's colleague from the southwestern region of Palatinate, believes that there are more than 250,000 radical Christians in the country and US missionaries are increasingly coming to Germany to spread the word.

"These are sectarian groups that don't work for the benefit of the public," Ziegert said, adding that they were mainly concerned with merging politics and capitalism to reap the largest possible profit.

Experts also differ whether these groups will start becoming more politically active in the future. Both Hauth and Klaiber said they don't believe they will. But Ziegert said he expected to see a growing political with backing from the US.

"The new Christian right is in the midst of forming," he said.

It's impossible, however, to impose the US societal fabric on Germany. While 60 percent of Americans say that religion plays an important role in their lives, only 20 percent of Germans feel the same.

A German federal court has ruled that a regional ban on Muslim teachers wearing headscarves in public schools must also apply to Christian nuns, according to a news report. (Oct. 10, 2004)

Too Catholic For Munich's Airwaves?

The decision to award a Catholic radio station one of Munich's coveted FM frequencies has caused outcry among critics who say the programming is too fundamentalist. (June 5, 2004)