German Protestant Church elects first woman as its leader | Germany | News and in-depth reporting from Berlin and beyond | DW | 30.10.2009

Germany's Protestant Church on Wednesday elected Margot Kaessmann as its first female leader. She has said she wants to head a contemporary church that draws more people to the faith. 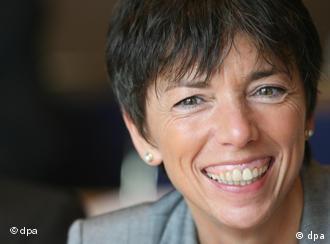 Germany's Protestant Church council elected Margot Kaessmann as its chairperson on Wednesday. She is the first woman to lead Germany's 25 million Protestants.

Kaessmann, 51, steps into the position previously held by 67-year-old Wolfgang Huber, who is going into retirement. She comes to the top job from Hanover, where she has been bishop for more than 10 years.

Kaessmann, who received 132 out of 142 votes, said she wants to work toward drawing more people to the faith with a contemporary church.

The charismatic church leader, who is popular with the media, made headlines in 2007 when she filed for divorce from her husband of 26 years. However, her marital difficulties did not appear to play a role in the vote.

During voting in the southern German city of Ulm, which took some 16 hours and 12 rounds, the church synod elected 13 of the 14 church council members.

The final council seat will remain open until a further meeting of the synod in 2010, as the required two-thirds majority for the final position could not be reached. It is the first time in the history of the German Protestant Church that all 14 council positions have not been filled.

The Vatican has announced the creation of a new structure that will allow whole Anglican congregations to convert to Catholicism. The move reveals a power struggle between the Catholic and Anglican churches. (20.10.2009)

A memorandum by a senior German protestant clergyman heavily criticizing the Pope and the Catholic Church in Germany has thrown interfaith relations between the two denominations in the country into turmoil. (15.10.2009)