The German press had mixed reactions to Barack Obama's long-awaited VP-candidate pick. Some praised his choice for shoring up his weak foreign policy background; others derided him for picking a Washington insider. 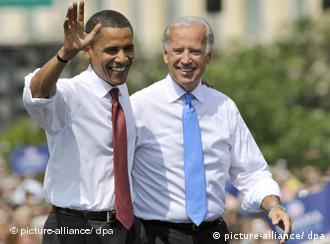 His foreign policy experience is good -- but where's the change?

The Sueddeutsche Zeitung noted that many Americans don't trust Obama to lead them through global conflicts, but “Joe Biden is expected to counterbalance this defect. The 65-year-old brings along indisputable political experience, a fact that should calm the fears of many who doubt Obama. He could step in as president at a moment's notice. And over the years, he has never lost touch with his party's base: the white voters in small-town America whose approval Obama has been seeking with little success up to now, but whose vote he desperately needs. Taken all together, it means naming Biden as his running mate was the best choice Obama could have made,” the paper concluded.

Another newspaper that thought Obama made the best of his situation was the Hamburger Abendblatt. It wrote: “At age 47, Barack Obama is young. At 65, Joseph Biden is already an old hand on deck of the political Starship Washington. One wants to take office in order to give Americans a sense of belief in themselves. The other must see to it that the rest of the world believes in them again, too. This makes Barack Obama and Joseph Biden a promising team. To put it bluntly, Biden is the better Hillary."

“The fact that (Obama) didn't name Hillary Clinton as vice president is a self-assured sign," wrote the Financial Times Deutschland. "Yes, he will have to fear that Clinton voters will refuse to go to the polls for him. But it is more important not to be seen as a candidate who is being led around by the nose by the Clintons. Joe Biden is a good vice presidential choice. Unlike Obama, he brings foreign policy experience to the ticket. Raised in a working-class family, he speaks to voter constituencies which tend to be critical of Obama, who is seen as elite."

Still, the FTD pointed out something on the minds of many editorial writers in Germany when it said Biden's insider status was hard to reconcile with Obama's change-based campaign. “The Republican campaign will go to town with the fact that Biden recently said Obama was not ready to be president,” the FTD wrote. “And one has to wonder how Obama will be able to keep up his message that his campaign is about creating change in Washington, with a running mate who has long been a standard representative of Washington business-as-usual.

For its part, German daily Die Welt complained that Obama made an “astonishing” choice that highlights the Democrats' “self-definition problem…Biden does not represent any key party wing, represents the second-smallest state in the union, does not pull in any significant donors, and has no special merits as a manager … Instead of bringing additional domestic political skills to the ticket, Biden is further narrowing (Obama's) image as a foreigner and a smooth talker. Obama is a candidate with some roots in Kenya, who grew up in Indonesia and far-away Hawaii; a black man who for a long time felt at home among radicals with a tendency towards African identity politics. In the voters' minds, Joe Biden is as much of a blank page as Obama. … By choosing Biden, Obama doesn't seem like less of an outsider, but more of one.”

The Frankfurter Rundschau noted that while Obama hadn't made a mistake nominating Biden, “he hasn't gotten much in the bargain, either. … (Biden) would make a loyal VP in the White House, and at 65 is unlikely to be plagued by higher ambitions. But how does someone like Biden fit into the message of the new breeze that is supposed to blow through Washington? The Republicans will paint Obama's decision to call on an old-guard Washington insider as a weakness.”

Barack Obama said he supports President Bush's position in the Caucasus crisis, while John McCain used the conflict to highlight his foreign policy skills. But the next US president will have to repair ties with Russia. (22.08.2008)

The Race for the White House

Click here for DW-WORLD.DE's complete coverage of the US presidential election. (25.08.2008)