More than 2,000 competitors are in Berlin for the 14th European Maccabi Games. A symbolic flame was lit at the opening ceremony marking the start of the so-called "Jewish Olympics." 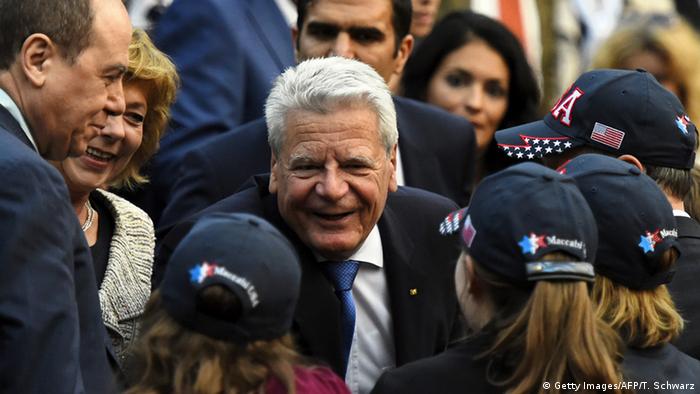 The opening ceremony was held in the Waldbühne amphitheater, part of Berlin's Olympic sports complex, on Tuesday night. 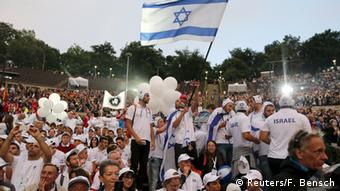 The Israeli delegation to the games is the largest, followed by the team from the UK.

German President Joachim Gauck made the opening speech in front of 15,000 people. He stressed the symbolism of holding a Jewish sporting event at a site built under the Nazis, and in a year when Germany and Israel were celebrating 50 years of diplomatic relations.

"I'm glad and I think it is significant that you chose this place, and I am very moved that this country and this city will now see the Jewish games," he said in his opening speech.

I think it's great that the Jewish community in Germany is growing and Jewish life has become so vibrant here again," Heiko Maas, Germany's justice minister said before the ceremony.

"It's not something we could possibly have ever hoped for after World War Two and the Holocaust. I see this as a stroke of good fortune and gift for our country that we didn't deserve."

To mark the 50th anniversary of German-Israeli relations, there was a youth orchestra of 50 musicians playing at the ceremony, half of them from each country.

Descendants of Jewish athletes who appeared at the 1936 Berlin Olympics were invited to light the flame at the Maccabi Games.

A Jewish band from Berlin, Jewdysee, sang the official Maccabi song "Maccabi Chai." German-Muslim singer Adel Tawil and the American-Jewish artist Matisyahu performed together before the ceremony was finished with fireworks.

The Jewish population in Germany is currently 250,000, which Chancellor Angela Merkel has described as a "miracle."

Merkel wrote in the programme "in view of the past, Germany may truly be thankful for the restored diversity of Jewish life in our country and for the renewed trust of the guests from abroad."

There is currently a Jewish population of 45,000 people in Berlin, many of them coming from eastern Europe, Israel, Australia, France and the United States.

Rainer Kampling, a theology professor at Berlin's Free University said: "That the Maccabi Games will be in Hitler's stadium is truly sensational."

The 10-day games will include competition in disciplines from athletics, basketball, soccer, squash, swimming and fencing to chess, bridge and bowling.

The Maccabi Games were first held in 1929 in Prague. Jewish people wanted a competition free of discrimination and anti-Jewish sentiment.

A predecessor to the games was also held seventeen years earlier in Berlin. The competition found its roots in the Zionist movement at the end of the 19th century.

Propagator of the "Muskeljuden" or "Muscle Jews," Max Nordaau, designed the games to disprove the image of Jews as "overly intellectual" and "weak."

The Zionist movement also believed that it would be useful to have young trained people available for the construction of the new Israel.

The last Maccabi Games were held in 2011 in Vienna. Participants need at least one Jewish parent or grandparent to qualify for competition.

For the first time, the games will include a cultural program intended to raise the event's profile and broaden its appeal.

The competition is scheduled to begin on Wednesday and continue through August 5.