Members of infamous biker gangs such as the Hells Angels, Outlaws and Bandidos are known for violent turf wars, terrorizing entire cities in Germany. The police are now cracking down on them. 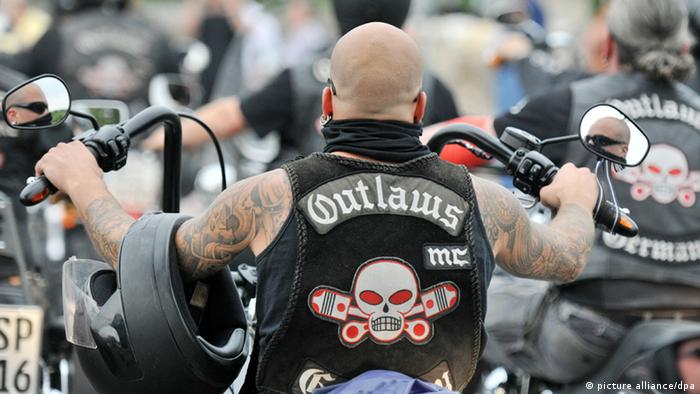 The Outlaw motorcycle club, founded in 1935 in the US, is now firmly established in Europe

Dressed in leather jackets and pants with studded belts, and sporting tatoos and menacing looks, some members of motorcycle gangs such as Hells Angels, Bandidos or Outlaws seem to enjoy their ferocious image. But now the German state of North-Rhine Westphalia (NRW) is ramping up the pressure on biker gangs.

On Thursday, the northwestern state's Interior Minister Ralf Jäger banned the "MC Bandidos Aachen" gang and five of its sub-groups. More than 600 police officers raided apartments and offices of the club and seized weapons, cash, computers and even a gadget for tapping police wireless.

The biker gangs have long been considered violent, and believed to have links to organized crime. Jäger said the police operation was carried out following tip-offs that the Bandidos "wanted to expand their criminal dominance" in the area in and around the city of Aachen.

Authorities say there is plenty of evidence to show the gangs are gaining strength. "Since mid-2005, the number of biker groups has almost doubled," said Thomas Jungbluth, head of the organized crime unit with NRW's criminal police agency.

The Bandidos alone registered 12 chapters in 2005, Jungbluth said, adding that today that number has grown to 25 chapters with 900 members.

Dirk Wilking, motorcycle gang expert at the Brandenburg Institute for Community Consultancy, said the groups operated as "large enterprises" across Germany and Europe. "They especially pursue economic interests and are largely active in the area of organized crime."

The gangs are usually linked to gambling, prostitution, arms dealing, extortion, money laundering and drug trafficking. The big international biker gangs are primarily involved in the drugs trade, including anabolic steroids. The latter, Wilking said, is a relatively new development. "These substances are supplied to fitness clubs, partly by biker gangs," he said.

The gangs constantly try to operate outside the borders of the European Union's Schengen zone, in countries on the edge of Europe where they can set up laboratories to prepare synthetic drugs. "Then they're out of reach of the EU and Europol," Wilking said.

The bikers' trademark include riding prestigious motorcycles such as Harley Davidson and sporting leather jackets with their clubs' insignia sown on the back. The Bandidos' patch bears a tubby Mexican wearing a large sombrero and carrying a machete in one hand and a pistol in the other. The Hells Angels' insignia is the "death's head" logo with wings. 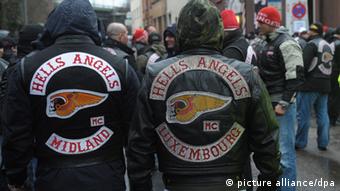 Insignia is a crucial part of the biker gang culture

The insignia alone is full of powerful symbolism, Wilking said. "It plays a crucial role, because these groups offer a masculine image that hardly conforms to what's acceptable in society anymore: a proper macho, a real man. The law doesn't apply to me. I'm a biker."

That's the reason it's mostly working-class men who attracted to these gangs, Wilking said, even though at times even the occasional lawyer could be found in their ranks. "That's what makes these groups so attractive."

But prosecuting criminal bikers is far from easy. "Bikers usually maintain a wall of silence towards any investigations," Jungbluth said. "Even if a member is seriously injured, he will not give any tips that could lead to the perpetrator being caught."

Rather, bikers often make completely implausible statements to block the investigation or make it more difficult. There are hardly any bikers who leave the scene and if they do, they "have to reckon with harsh reprisals," Jungbluth added.

Founded in 1966 in San Antonio, Texas, the Bandidos have their roots in the US army. Their founder was a former Vietnam Marine veteran, Donald Eugene Chambers. His club was a refuge for soldiers who returned back to the US disappointed by the Vietnam war and sought a new home.

The motorcycle embodies the symbol of freedom linked with a strong sense of belonging to the group. The Hells Angels were formed in 1948 in California. After merging with further clubs, the gang expanded to Europe in the 1960s.

Bans are just a temporary solution

Biker expert Dirk Wilking says banning the groups, as was done in North-Rhine Westphalia, is a good approach. The gangs define themselves through their uniformity and their menacing appearance, so it's easy for them to spread an atmosphere of fear and intimidation. "That can only be broken with bans," Wilking said.

But the problem is that it's usually only local groups that are banned - as in the case of North-Rhine Westphalia.

"So you put a permanent ban one chapter of the gang, and then on another, but you don't get to the network of organized crime itself,” Wilking said. The local groups are only the local expression of an international phenomenon.

Hell's Angels motorbike gangs have been outlawed from the German city of Frankfurt. State authorities banned the bikers after accusing of them of criminal activity and seizing control of the streets. (30.09.2011)

A member of the infamous motorcycle gang Hell's Angels kept his mouth shut on the opening day of a trial in which he's charged with murdering a police officer "execution style." (14.09.2010)