Police in Germany Monday issued a nationwide warrant for three Swedish nationals believed to be involved in a brutal assault by neo-Nazis on left-wing activists at a highway rest stop following demonstrations in Dresden. 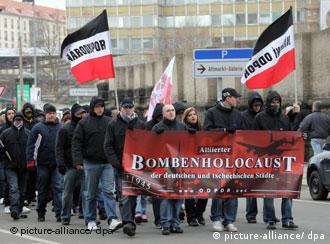 Around 6,000 neo-Nazis marched in Dresden, including people from outside of Germany

Police said the attack left a 42-year-old man hospitalized with a severe skull fracture after the attack which took place on Saturday evening near the eastern city of Jena.

Between 15 and 20 neo-Nazis are reported to have assaulted the occupants of two buses at the Teufelsstahl rest stop on the A4 highway.

The attack on the some 80 labor union members, peace activists and members of the Left Party from the states of Hesse and North Rhine-Westphalia occurred when they were on their way home from protesting a 6,000-strong neo-Nazi march in Dresden to commemorate the victims of the 1945 Allied bombing raids on the eastern German city.

Police have created a special working group to investigate the incident.

Police too late on the scene?

“The neo-Nazis attacked our two buses with the words ‘attack anti-fascists,' bottles and blocks of ice weighing several kilos,” Holger Kindler, head of the Confederation of German Trade Unions (DGB), which took part in the anti-fascist protest, told the AP news agency. 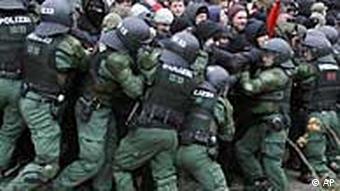 The chartered bus full of 41 neo-Nazis left the rest stop by the time the police arrived on the scene. But they were stopped further down the road while police took down their personal information.

On Monday, the DPA news agency reported that police officials had no evidence yet that the Swedish nationals on the coach were specifically to blame, but said they wanted to catch them before they left Germany to go back to Sweden.

“It is inconceivable that the departure of these dangerous thugs could go unobserved by the police,” Bodo Ramelow, deputy chairman of the Left Party, told DPA. He demanded an investigation by the Thuringia state parliament.

Police said a similar attack on leftists at another highway stop near the city of Chemnitz over the weekend by homebound neo-Nazis left four persons slightly injured.

More than 10,000 people protested against the massive far-right demonstration in Dresden over the weekend. Politicians, members of the Jewish community, left-wing activists and trade unionists took part in the anti-fascist protests.

Thousands turned out in central Dresden to protest a march by far-right supporters on the 64th anniversary of the Allied firebombing of the city. Police clashed with left-wing protestors, who threw stones and bottles. (14.02.2009)