A young, naked Munich woman noticed a drone flying above her rooftop spot on a sunny day. She ran down to confront two men who were hastily packing up the drone. 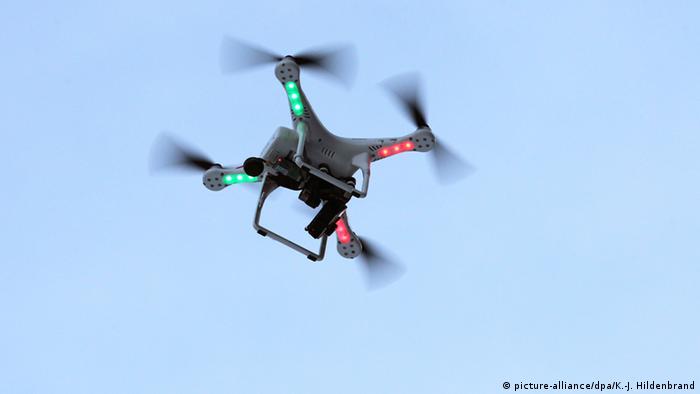 A group of around 10 people took off their clothes, killed a sheep and chained themselves together next to the infamous "Arbeit Macht Frei" gate at Auschwitz.

Some 100,000 drones are expected to be given as presents in Germany this Christmas.

The dead cat drone with an eco message

When his cat Orville died, Dutch artist Bart Jensen wanted something to remember him by. Soon, the deceased family pet had taken to the skies carrying a message about the absurdity of technological progress. (28.02.2017)

Forget Playboy, here's where to get naked in Germany

Hugh Hefner, who turns 90 on April 9, is known for bringing us pages of nude women in lascivious poses. But in Germany, stripping down to your birthday suit isn't reserved for glamorous waifs. Anyone can do it. (07.04.2016)

Munich police are hunting for two drone operators who allegedly spied on a naked sunbather, they announced on Friday.

A 25-year-old woman was lying naked on her rooftop catching some early spring sunshine, when she realized a camera-equipped drone was flying above her, police said.

She quickly got dressed and confronted two men who, by then, were packing up a drone in the street. They denied filming her and left the area.

The Commissariat 15, Bavaria's sexual offenses police unit, opened up an investigation into a violation of privacy laws and a possible infringement of Germany's Air Traffic Act (Luftverkehrsgestz).

People all over Munich enjoyed the sun that day as temperatures hit 22 degrees Celsius (72 degrees Fahrenheit) in the warmest day of the year so far.

The alleged perpetrators were both aged between 40 and 45 old and spoke with a Bavarian accent.

Munich daily "Süddeutsche Zeitung" reported it wasn't the first drone encounter for Munich police. In January a car collided with a 1.2-kilogram (2.6-pound) drone that landed on a busy highway, the paper reported. In October a drone operator in the city was facing possible jail after a 1.7 kilogram drone narrowly missed a family of four, the paper reported. And in October a drone at Munich Airport came dangerously close to an Airbus A321 coming in to land.

It is estimated that there are more than 400,000 drones in Germany.